Barlinnie Prison is the largest prison within Scotland, it was built to hold around 987 prisoners but holds over 1,000 people. The prison has been open since 1882 but is now due to be demolished in 2025. The prison is currently still in use and still has its five main halls which are halls A to E, and they hold 200 inmates each. Before the prison can be demolished or not there has to be a removal of bodies. When capital punishment was still legal within Scotland, there was a series of capital punishments that took place within the prison between 1946 and 1960. A total of 10executions took place these included Peter Manuel, Anthony Miller and Patrick Carraher. Peter Manuel was a serial killer and was convicted of killing 9 people across Lanarkshire and Southern Scotland, Anthony Miller was the last man to be hanged at Barlinnie in 1960, he was convicted of killing a man at Queens Park Recreational ground on April 6th 1960, Patrick Carraher was a notorious Glasgow gangster who was convicted after murdering a young soldier in a drunken altercation.

All 10 of the hanged criminals including Patrick, Anthony and Peter were buried in unmarked graves within the walls of the prison as they were claimed to be the property of the state. However, when the D halls were under renovation in 1997 it was then that the prison gallows were the prisoners were hanged were finally demolished, the bodies were dug out and moved elsewhere on the grounds of the prison. The prison is now due to be demolished in 2025 and the current prisoners are going to be moved to the new prison HMP Glasgow which is due to be completed at the end of 2023 if all goes well. The plan is that once the prison is empty the bodies of the prisoners that were hanged will be dug up and if there are any relatives that can be contacted they will be and they will be able to decide whether the bodies are reburied or cremated. If no relatives can be contacted, then the bodies will be cremated.

Within Glasgow it was the Lord Provost who paid for the executions. They usually took place at 8am and within an hour the bodies of the hanged were already in a grave and covered in lime, the reason lime was used is because lime is good at protecting the body and delaying decay. The prison officers then posted a bulletin on the prison gate. The rope used in the hangings was sent up by train from the London office and then when it had been used it was returned to London. Barlinnie Prison was not the only prison within Scotland that executed its prisons. Most prisons had an execution suite where prisoners who had committed capital crimes such as murder were hanged, it was not just Barlinnie.

I want to tell you a little more about one of the most famous prisoners of Barlinnie that was killed there that I mentioned earlier on within this article and that is Peter Manuel. Peter Manuel was a convicted serial killer and was hanged at Barlinnie on the 11th of July 1958 at the age of 31. He was the second last person to be hanged in the prison and the third last to be hanged within Scotland. The police said he was a petty thief at the age of 10 and at the age of 16 he committed a number of sexual attacks and ended up spending nine years within Peterhead Prison for these attacks. He served more sentences for rape before the beginning of his killing spree in 1958. 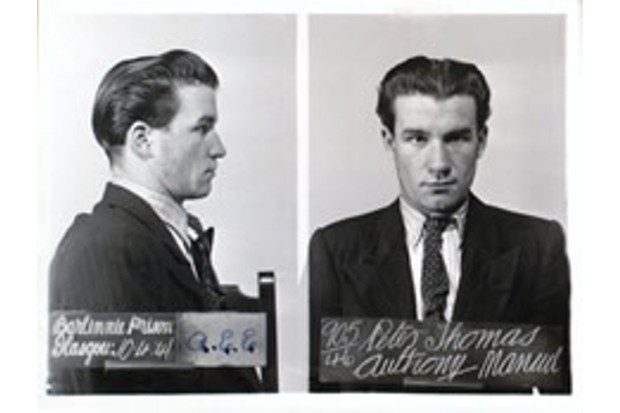 His first victim was Anne Kilneilands who was 17, Manuel raped and bludgeoned with a length of iron to death at East Kilbride Golf course on January the 2nd 1956. His second, third and fourth victim were Marion and Vivienne Watt who were 45 and 16 and Margert Brown who was 41. Marion, her daughter Vivienne, and Marion’s sister Margert were shot to death at their home in Burnside Glasgow on the 17th of September 1956, Manuel was out on bail for a burglary at the time.

His fifth victim was Sydney Dunn, a taxi driver who was 36 who was shot and killed by Manuel on the 8th of December 1957 while looking for work within Newcastle, his body was found in the Moorlands in Northumbria not long after. Manuel had already returned to Lanarkshire by this time. His 6th victim was Isabelle Cook who was 17 she disappeared while on her way to her school dance in Uddingston Grammar School on the night of the 28th of December 1957. Manuel stalked Cook he then raped and strangled her and buried her lifeless body in a nearby field. His 7th, 8th and 9th and final victims were the Smart family. Peter Smart was 45, Doris Smart was 42 and Michael Smart was 10. The Smart Family were within their home in Uddingston on January 1st, 1958 when Manuel shot them to death, he then spent a week within their home and even fed their cat. He then stole some brand-new bank notes and stole their car which he abandoned.

Many police officers suspected Manuel, but they couldn’t prove it they knew the history Manuel had. It wasn’t until not long after the Smart family murder that Manuel used the same banknotes he stole from their house to pay for drinks in an east-end pub within Glasgow that the police were able to arrest him as they knew that the killer of the Smart family stole the banknotes.

Manuel was trailed for murder at Glasgow High Court on the 12th of May 1958. Manuel sacked his lawyers and chose to defend himself which shocked many of the people person at his trial. Within twenty minutes the jury had found Manuel guilty of all murders expect that of Anne Kneilands which had been dropped due to lack of evidence. The judge of the trial Lord Cameron admitted that Manuel had committed these murders with “a skill that is quite remarkable.” However, the was unable to convince the jury of the trail of his insanity plea and was found guilty as I explained within 20 minutes of the trial.

Manuel spent 8 and a half weeks from the 12th of May to the 11th of July 1958 within Barlinnie Prison before being hanged in the execution suite there on the 11th of July. His body was buried on site as it was seen as property of the state and is still on the grounds of Barlinnie Prison to this day. Manuel’s bodies will be one of the ten to be dug up once the prisoners move from Barlinnie into HMP Glasgow in 2023 OR 2024. The other remains will include Anthony Miller 19, Patrick Carrher 39, John Lyon 21, John Caldwell 20, Christopher Harris 28, James Robertson 33, James Smith 22, Patrick Gallagher Deveney 42 and George Francis Shaw 25.

It will truly be interesting to see if any of these hanged criminals living relatives come forward if there are any and if they do what they plan to do with their remains if they want them reburied or cremated. We will just need to wait and see once the bodies have been recovered from the grounds of Barlinnie.

In this article:barlinnie, Featured, peter manuel