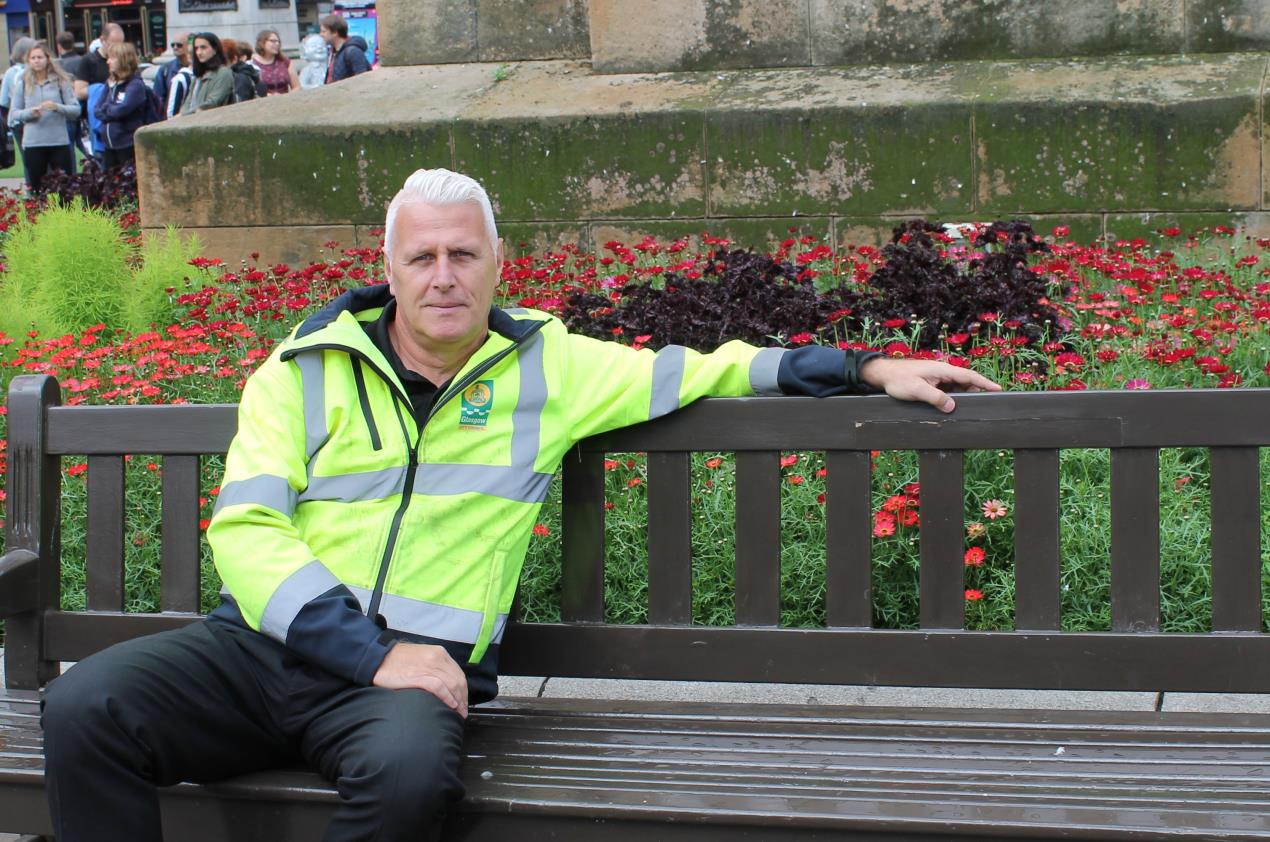 Frontline workers across Glasgow are being trained to look out for people who may have thoughts of suicide amongst friends, family, colleagues and the public.

An army of 40 suicideTALK session leaders are visiting offices, banks and depots to encourage employees to talk about suicide and recognise the signs that someone could be at risk.

Glasgow’s Health & Social Care Partnership (GCHSCP) has trained staff and charity volunteers to teach others how to broach the subject sensitively and tactfully with anyone they are worried about.

Staff at Glasgow City Council and NHS Greater Glasgow and Clyde are among those who have received the talks as well as supermarket and bank staff, benefits advisors, faith groups and bereavement charities.

Larry Callary, Session Leader for suicideTALK, said: “Life can be very stressful, yet there is still stigma around admitting to thoughts of suicide. Talking about your problems is imperative – it could save your own or someone else’s life.

“People contemplating suicide may use what we call ‘invitations’ as a way to invite help. It’s important to recognise these, talk to them about it and not be afraid of using the word ‘suicide’ in those conversations.”

The suicideTALKs highlight key ‘invitations’ to look out for – especially if they coincide with financial difficulties or a major life event for that person such as a bereavement or relationship breakdown. These can include someone suddenly becoming withdrawn, a distressed person stating “I’ve had enough”; “I have a solution”; or “I want to escape”.

If you are worried about someone – don’t be afraid to broach the subject of suicide. Specifically use that term – avoid asking “are you thinking of doing something silly?”. This wrongly implies they are silly for thinking about it and they may not want to confide in you.

A good approach is asking – “Are you OK? I’ve noticed that you seem stressed / depressed – sometimes when people feel like that, they think about suicide. Is that something you’re thought about?”

Listen sympathetically to what is going on in their life and make it clear that help is available. Keep them safe by encouraging them to seek help either from their GP, the Samaritans or Breathing Space.

Father-of-five, Larry, said: “Having thoughts of suicide is a normal human reaction when life gets painful and it’s important that people talk about how they feel. Suicide prevention is not the job of one person or service. Anyone can prevent suicide.

“We would encourage anyone with thoughts of suicide to talk to more than one person and get the support they need. And we would encourage people to intervene if they are worried about someone. Suicide Prevention is everybody’s business and there are a lot of resources out there that can help.

“The positive thing is when people have admitted to having thoughts of suicide during the training, their colleagues have been hugely supportive. The suicideTALKs spark debate and discussion and people often feel able to discuss their own experiences.”

If you or anyone close to you is struggling with issues of suicide, please seek help, either from your GP, the Samaritans (call free on 116 123 or by email at jo@samaritans.org) or from Breathing Space (call free on 0800 83 85 87).

Glasgow’s Health and Social Care Partnership also runs an out-of-hours Mental Health crisis service. It can provide short-term intensive community based care and is targeted at people who are experiencing a mental health crisis. It operates seven days a week and is available by phone on 0845 650 1730, Monday to Friday 8pm – 9am, weekends and public holidays 5pm – 9am.

Find out more about Suicide Prevention Training and sources of help for anyone struggling at https://www.yoursupportglasgow.org/chooselife.aspx

If you are having serious thoughts about suicide, and have a plan and the means to carry it out: call 999 immediately.

While working outdoors with a colleague, he was approached by a woman who said someone was attempting suicide nearby.

They rushed to investigate, and found a man in his early 30s teetering on a bridge parapet.

He said: “Everyone was just walking past the guy, like they didn’t want to get involved. No-one stopped. I think they thought, because we were wearing hi-vis vests they could leave us to sort it out!

“We phoned the police and I walked over to the guy, not getting too close, and started talking to him, asking his name. I asked why he was doing this. I kept telling him it would be OK, and he should climb back over towards me, but he kept saying he didn’t want to be here anymore.

“You’re trained not to try to grab anyone, as they might fall. I made general conversation with him to try to take his mind off what he might do. I tried to use humour to try to lighten the situation and he gradually started to calm down a bit.

“I asked him what football team he supported, and if there was anything I could get him. He said he wanted a cup of tea, so I offered to take him for a cuppa at a wee café round the corner. I said, I was parched too, so we could go together.”

The man eventually agreed to go to the café. He brought one leg back over the parapet, but panicked when the police arrived and again threatened to jump. George asked the police for some space, as he’d struck up a rapport with the man and had almost convincing him to climb to safety.

After several more minutes of reassurance from George, the man eventually climbed to safety. True to his word, George went and bought him a cup of tea which he drank, before the police took him to hospital.

George said: “The training was very good. I think it gave me the confidence to try to help the guy. You never want to see anyone hurt themselves.”

The end of his first marriage and a long-standing battle with mental health problems drove Derek Chalmers to attempt suicide.

Derek of Glasgow’s Southside said: “I’d struggled with my mental health since my teens and the end of my marriage sent me over the edge. I was drinking and started using drugs and as time wore on I didn’t like the person I could see myself becoming. I’d had suicidal thoughts in the past, but this was the first time I planned what I was going to do in any detail. I rehearsed it and rationalised it in my mind.”

Luckily, the father-of-three survived, and the shock of what he’d done later made him realise he wanted to live and desperately needed help.

Eight years on, Derek is in a much happier place after receiving treatment, changing careers and meeting his second wife. The 40-year-old now uses his personal experience to help others – working as a peer support worker with mental health charity SAMH in North Lanarkshire.

In his spare time, Derek also volunteers for MindTheMen – a voluntary group which meets weekly in Springburn and Partick.

He said: “There is still a stigma around suicide and mental health issues. I felt guilt and shame about what I’d done, because it would have hurt others, but I also had a sense of relief that it hadn’t worked. I still have my bad days, but I know my triggers and how to manage them. I get a lot from using my personal experiences to help other guys open up about their own mental ill-health and thoughts of suicide.”

MindTheMen was set up by Gary Macdonald in memory of his cousin, Grant, who died by suicide. The group was set up as a legacy to Grant with flyers, t-shirts and wristbands bearing the club slogan, #supportgranted.

Men aged 18 to 80 years, from all walks of life attend. On the first night at the West of Scotland Cricket Club in Peel Street, Partick, – 31 men walked through the door. A new branch in Springburn Community Hub in the shopping centre is also helping men in the North of the city. Both groups meet on Mondays from 7pm-9pm.

Father-of-three, Derek, said: “There is a lot of toxic masculinity in society today, which suggests big boys don’t cry or it’s weak to admit you need help. That’s utter rubbish and it’s costing lives. We have a phrase that’s been used more and more at MindTheMen, it’s very simple and very powerful  – It’s Not Weak to Speak.”

MindTheMen is a suicide prevention peer-to-peer support group where men can meet in a safe place, talk openly, be listened to and feel supported. It is not a crisis service. The volunteer facilitators have all received suicide prevention training and will signpost men to help. But anyone who needs urgent, immediate help should contact their GP, The Samaritans or Breathing Space.

MindTheMen is confidential and free. No one need give their real name and everyone is guaranteed a warm welcome. Free tea and coffee are also on offer. Find out more on Facebook or twitter @mindthemen or go along to a meeting.

Derek said: “Anyone new walking through the door will be welcomed warmly by our facilitators and members.”