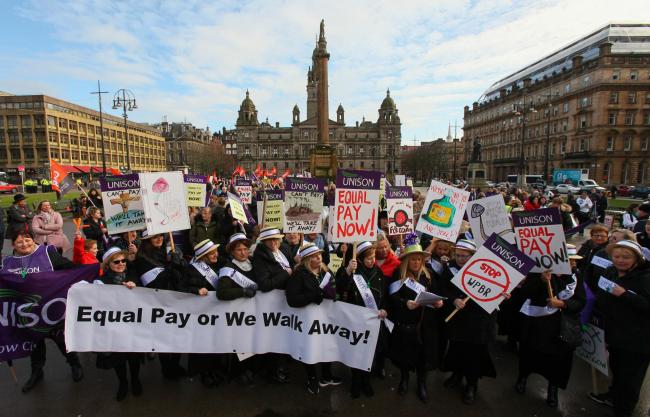 SETTLEMENT of Glasgow’s long-running equal pay dispute is set to move a step closer, with councillors being asked to formally approve a cash offer to claimants.

Earlier this month, the council and the equal pay claimant group represented by Action4Equality, UNISON, GMB and UNITE reached an agreement in principle on a package of payments worth around £500 million.

Today [Friday, 1 Feb], the council published a report that will go before members of its City Administration Committee next week.

In addition to asking councillors to approve the deal, the report outlines how the settlement will be funded – with some of the city’s property assets to be used to unlock loans.

Council leader Susan Aitken said she expects members to back her deal, which could see claimants receive compensation payments from as early as June this year.

“I’m delighted that we have agreement with the claimants and to be able to recommend to my colleagues a deal that finally delivers pay justice for thousands of women in our workforce,” she said.

“After a decade going round in circles in the courts, we have reached a fair settlement through twelve months of tough but open and honest negotiations.

“This report is our opportunity to put right a wrong that has damaged the council, its workforce and the city for too long. I trust that every member will want to take that opportunity.”

The paper, which will go to committee on Thursday, February 7, also includes further detail on how the council plans to meet the cost of the settlement – seeking authority to use property assets to secure loans.

Wholly-owned arm’s-length company City Property Glasgow Investments LLP is currently engaging lenders with the aim of refinancing a loan originally taken in 2010 – releasing significant additional value due to a growth in the value of its assets and more favourable interest rates.

It is also proposed that the council will sell a significant further portfolio of operational buildings to City Property and then lease them back at a commercial rate.

The purchase would be funded by long-term loans, with the lease payments meeting the annual cost of the borrowing.

Crucially, this means the buildings would remain in the city’s ownership and users would not see any difference in how they access them on a day-to-day basis.

Cllr Aitken said: “I’ve always been clear that, although settling equal pay has been about delivering justice for thousands of the women in our workforce, meeting the substantial cost of doing that must be fair for citizens.

“Releasing the potential of our property, while keeping it in the city’s ownership, protects services and the future of these valued assets.”