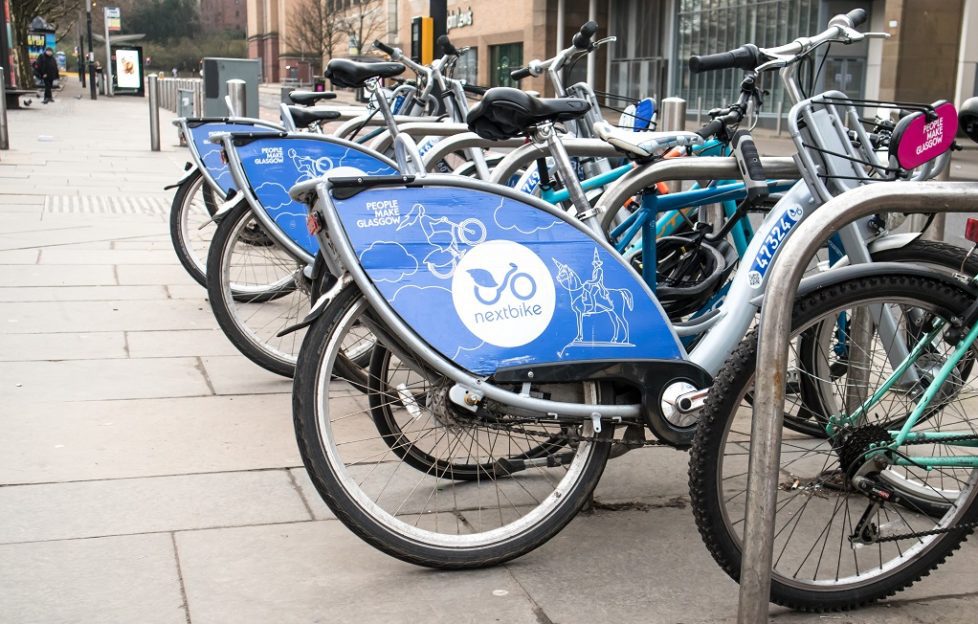 More than 60 electric bikes will be hitting the streets of Glasgow this week as the city’s nextbike scheme becomes more accessible than ever.

The fleet of 63 e-bikes and 21 electric stations launched on Wednesday (Oct 9), when the public will be able to see the bikes in action for the first time in George Square.

E-bikes are a combination of a conventional bike with a motor that take some of the effort out of pedalling for the rider. With top speeds of 25km per hour, the e-bikes can cover greater distances faster and with less effort.

The e-bikes, which will join the existing Glasgow fleet of 650 standard bikes, were made possible by a joint funding initiative from Glasgow City Council and the Transport Scotland eBike Grant Fund, delivered by Energy Saving Trust.

Glaswegians have made more than 830,000 bike rentals since nextbike launched in the city in 2014, cycling an incredible 1.4million km around the city – the equivalent of cycling to the moon and back almost four times.

Electric bike rental will not currently be covered by current memberships. Customers will be able to rent the e-bikes using their existing nextbike accounts. Rides will be charged on a pay-as-you-ride basis at £2 per 20 minutes or £30 per day.

Councillor Anna Richardson, City Convener for Sustainability and Carbon Reduction expressed her delight that e-bikes have taken their place in the city’s nextbike hire fleet.

Councillor Richardson said: “E-bikes are growing in popularity and having them available for hire in Glasgow is a fantastic option for getting about the city. Electrically-assisted bikes provide a boost to those who are building up their fitness, make longer trips by bike more manageable and open up cycling to people who may have not considered it before

“I am especially pleased to see the twenty-one new charging points spread so evenly across the city, from Possil and Shawlands in the north and south to Dalmarnock and Maryhill in the east and west.

“Adding e-bikes to the hire fleet is another clear demonstration of our commitment to pursue more sustainable forms of transport in Glasgow and add to the effort to decarbonise how we travel across the city.”

nextbike MD, Krysia Solheim, said she was excited to be bringing e-bikes to the city.

Krysia said: “E-bikes are not only great for reducing journey times and taking on steep hills – of which Glasgow has plenty – but they’re also a great way of increasing inclusivity and getting people of all abilities and fitness levels into cycling.

“Glasgow is one of our flagship schemes, so it’s fitting that the city will get our first significant fleet of e-bikes. We’d like to thank our partners for their support in making this ambition a reality, including Glasgow City Council, Transport Scotland, Energy Savings Trust and Bike For Good.”

Cabinet Secretary for Transport, Infrastructure and Connectivity Michael Matheson said: “I’m pleased that Scottish Government eBike Grant Fund has enabled the introduction of 63 e-bikes to Glasgow. Over £176,000 was provided to increase e-bike options across the city through the accessible nextbike service.

“This initiative provides access to the benefits of e-bikes and I am certain that people who live, work and visit Glasgow will be delighted to have this additional active travel option. It’s an exciting way to get around for everyday journeys which will encourage people to leave the car for a more sustainable mode of transport.

“Through the eBike Grant Fund, we’ve funded over 600 e-bikes across Scotland, which is an important step forward in improving our air quality, improving individual health and meeting our ambitious climate targets.”

Ellie Grebenik, Senior Programme Manager, Scottish Transport at Energy Saving Trust said: “The eBike Grant Fund awarded Glasgow City Council £176,623 and this contributed 50% of the budget for the purchase of 63 bikes and 84 docking stations at 21 charging points. This fleet of ebikes will be a great addition to the existing provision, enabling people cost effective access to sustainable and active travel across the city.”