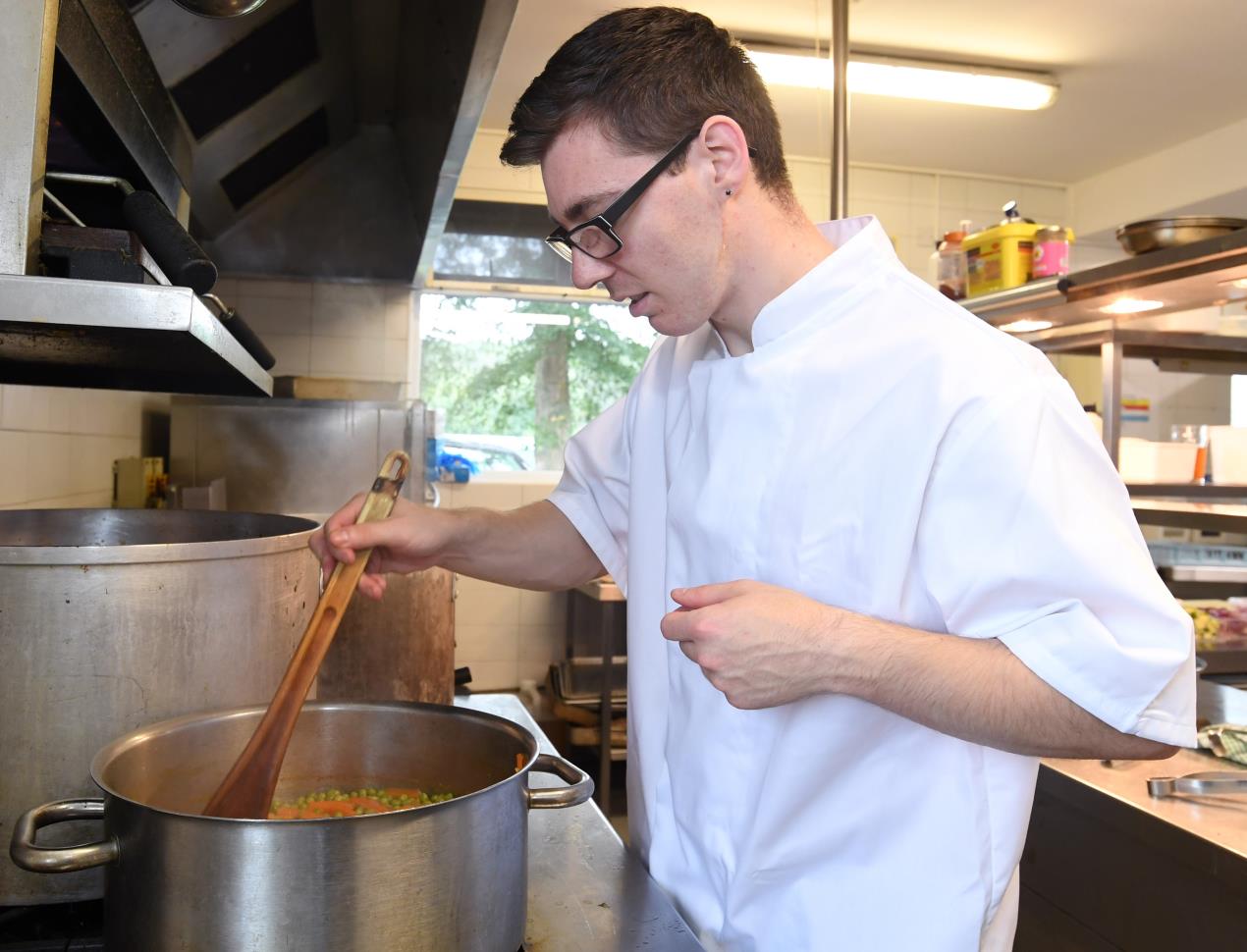 Eddie McGinlay’s job prospects were in the rough, until Glasgow Supported Employment Service helped him score a hole-in-one at a Glasgow golf club.

Despite completing Project Search, a one year work experience programme for people with learning disabilities, applying for over 100 jobs and securing 20 interviews, Eddie, struggled to find a job. Nerves got the better of him during interviews and he clammed up when quizzed about his abilities.

But the determined 24-year-old refused to give up and actions spoke louder than words when the employment service set him up with a work trial at Haggs Castle Golf Club. Eddie’s reliability and strong work ethic shone through, earning him a job as a kitchen porter at the club in May 2017.

Today, he’s progressed to performing sous chef duties preparing starters and puddings as well as the breakfast menu. He never misses a day’s work and regularly does extra shifts and overtime if asked.

His manager, Tracey Morgan, said: “Eddie is a model employee and an asset to the company. He is a diligent, fully integrated, popular member of the team with great time-keeping and a strong work ethic.”

Earning a wage gives Eddie independence and enables him to enjoy pastimes like going to the cinema and gym. He is also saving up for driving lessons.

He said: “It was disappointing when I kept applying for jobs but didn’t get one. The work trial was good, because I didn’t have to do an interview. I get really nervous and don’t know what to say.

“My job is really good, everyone is nice and there is a nice atmosphere. I get to meet a lot of the club members and talk to them. I get independence and enjoyment from working. It makes me happy.”

Last week, Eddie’s resilience was recognised when he was presented with two trophies at Glasgow City Council’s Leader’s Awards for Care Experienced Young People. Eddie bagged the Outstanding Award for Employment and also claimed the overall prize for Outstanding Journey and Achievement.

Cllr Susan Aitken, Leader of Glasgow City Council, said: “Eddie’s perseverance and determination to succeed is truly commendable. His work trial enabled him to show off his true abilities and land his job. He should be very proud of his achievements – his hard work has made him a valued employee at the golf club.”

Modest Eddie was overwhelmed by the recognition.

He said: ” I was really shocked and excited to win two awards. I wasn’t expecting it!”

His advice to people facing hurdles in life is: “Never give up – just keep trying and you will succeed in whatever it is you want to do.”

The Leader’s awards recognised the achievements of young people who are, or have been, looked after and accommodated by the council. Another 15 amazing young people were also honoured for their success in education, the arts and training.

Cllr Aitken said: “Each award winner was very impressive. As Corporate Parents, the council supports and encourages all our looked after young people to aim high and fulfil their full potential. These awards pay tribute to the talent, skills and hard work demonstrated by young people who – I’m certain will go on to achieve their life goals.”

Places are now available on the next Project Search programme which will run from August this year until June 2020, Monday – Friday, 9am to 4pm.

Applicants must live in Glasgow, want to work over 16 hours a week, be aged 18-25 years, be able to travel independently and have a learning disability or autistic spectrum condition. Participants are expected to have excellent timekeeping and attendance.

Project Search is based either in the University of Strathclyde or at Glasgow Royal Infirmary.

Anyone interested in joining, should attend a recruitment event in Glasgow City Chambers on March 25th, from 4.30pm to 6pm.

Glasgow Supported Employment Service supports those who have successfully completed Project Search and are still looking for their first paid job. Businesses interested in hiring someone should email supportedemployment@glasgow.gov.uk