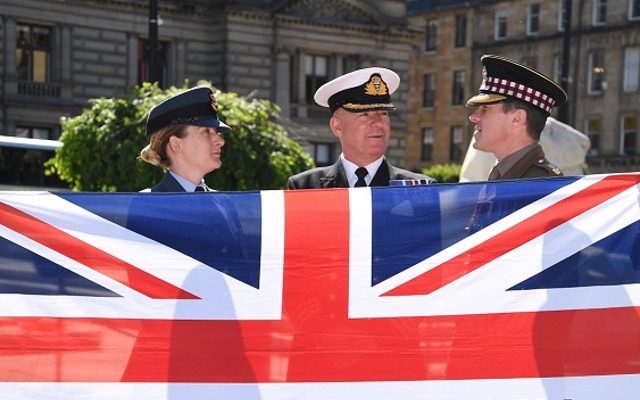 The Lord Lieutenant will take the Salute at the march past the Cenotaph just after 11 am joined by senior military including Commander John Cunane, HMS Dalriada, Colonel Sandy Fitzpatrick, Deputy Commander 51st Infantry Brigade and RAF Squadron Leader Archie McCallum.

The Lord Lieutenant said: “Glasgow’s Armed Forces Day is an opportunity to let the incredibly brave and professional men and women in our armed forces know that we are grateful for all they do. I’m looking forward to meeting everyone including our remarkable veterans – some who saw service during the Second World War.

“It’s also a chance for our citizens to demonstrate their pride in our military personnel and our veterans. Inevitably too, our thoughts stray to those far from home, serving in some of the toughest places on earth.”

Colonel Fitzpatrick said: “On behalf of serving and retired personnel from all the services, and their families, I thank the city of Glasgow for its generosity on Armed Forces Day.

“Armed Forces Day differs from Remembrance. It’s a chance to celebrate our military and allow communities to recognise and show their appreciation for the contribution they make. We’re extremely appreciative of the support we receive from Glasgow’s citizens”.

The parade will leave Holland Street at 11am followed by serving Royal Navy, Army and RAF personnel, as well as cadets from all three services and veterans.