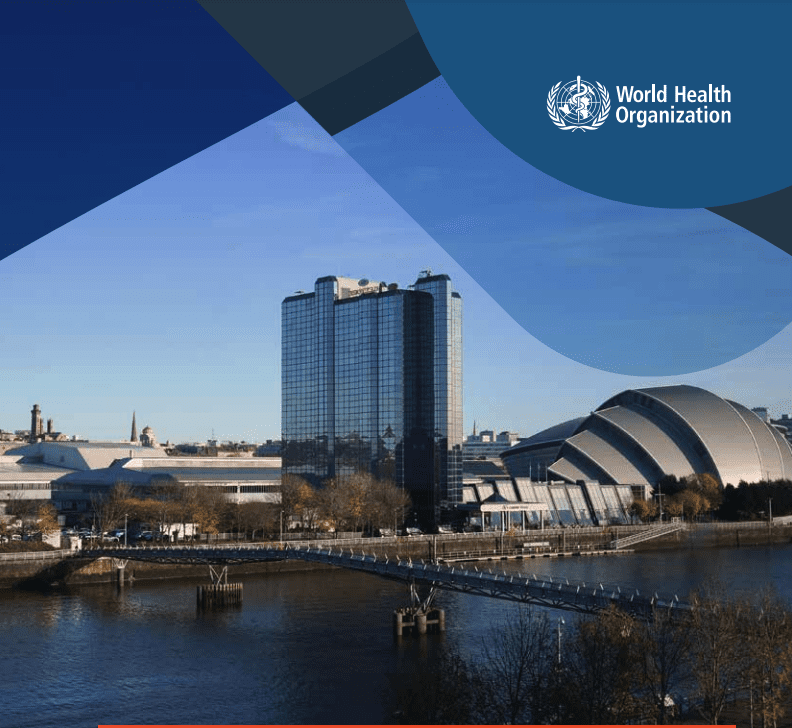 Glasgow is facing increased flooding and heat stress due to climate change which will have detrimental effects on public health and social equality, according to the World Health Organisation (WHO) Health and Climate Change Urban Profile, published today (16 June 2022).

The climate change urban profile presents a snapshot of key climate change hazards and climate-sensitive health risks that are affecting the city now.  It also looks at some of the measures Glasgow is taking to mitigate and adapt to the changes that the city is experiencing.

Glasgow is one of six ‘front-runner cities’ from around the world being profiled, by WHO, for their plans on mitigating and adapting to climate change.

Working with Glasgow City Council Glasgow and Glasgow Centre for Population Health, WHO put together a document detailing the immediate threats and risks Glasgow residents face, as well as what actions the city has taken to adapt to the changing climate.

The profile provides examples of some immediate risks based on available evidence and some of Glasgow’s priorities and initiatives that protect the climate and environment while having a direct health benefit, at a local level.

The profile features Glasgow’s Low Emission Zone, that came into force at the end of May and its contribution to improving air quality and public health and surface water and drainage projects to manage and minimise risk of flooding.

It also hails the adoption of nature-based solutions and tree planting projects in Glasgow and the wider city region to mitigate the impacts of carbon emissions in the atmosphere and provide shade, while offering areas for people to enjoy and contribute to their health and well-being.

Dr Maria Neira, WHO Director of Environment, Climate Change and Health, said “City councils have the power to change our lives for the better. They can address inequality, improve people’s health, and tackle the climate crisis at the same time. The WHO Urban Profile illustrates how Glasgow is leading the way to a healthy, sustainable future”

The profile comes as the council’s Central Administration Committee looks to adopt the Climate Adaptation Plan 2022-2030, for the city, next week. The plan looks at interventions and solutions for dealing with the current effects of climate change experienced in the city, and those predicated in the future, such as overheating and more flooding.

Over the next nine years The Glasgow Green deal, launched last year during COP26, will also work to achieve a fairer and more equal economy through taking action on climate change that impacts unfairly on the lives of the most vulnerable in the city.

WHO is launching Health and Climate Change Urban Profiles for six pilot cities. In addition to Glasgow, to date the project has published profiles for Indianapolis, Indiana and Washington, D.C.

Councillor Angus Millar, Glasgow’s City Convener for Climate, Glasgow Green Deal, Transport and City Centre Recovery, said:” This look at our city, by WHO, raises awareness about the immediate health threats from climate change that we, and many other cities like ours, face.

“Well over half the world’s population lives in cities, and many people rely on them for their health and well-being so it is important that they are at the forefront of the action to mitigate and adapt to these climate change shocks and longer-term stresses.

“Glasgow is striving alongside other cities around the world in tackling the climate emergency, and this profile highlights the broad range of work the Council and its partners are undertaking to improve the quality of life for our citizens through climate action.

“Projects like the city centre-based Avenues project, our strategic drainage and surface water management activity, and initiatives to promote greenery and biodiversity like the Wee Forests are all making a difference now – and we will only see the pace of action accelerated over the next few years as we deliver on Glasgow’s ambitious climate plan.”

Bruce Whyte, Glasgow Centre for Population Health, said; “This profile illustrates the challenges that climate change brings for Glasgow as well as the existing health and social inequalities the city faces. It also demonstrates initiatives Glasgow has in place that address both climate change and health and well-being that we can learn from.

“The profile will be an important reference for informing continuing efforts to adapt to and mitigate climate change impacts and will support the transition to a more inclusive, healthy and sustainable city.”