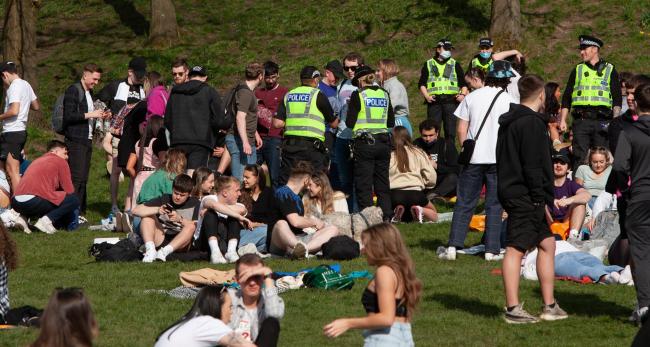 Over four hundred groups and individuals were refused entry to Kelvingrove Park last weekend as part of an operation to invoke the city’s rules on public drinking.

Officers from council’s community enforcement team and Police Scotland were stationed at gates around Kelvingrove to enforce park management rules that prohibit the consumption of alcohol within the park.  With 413 groups or individuals knocked back for trying to enter the park with alcohol, many others were also ejected from the park for consuming alcohol.

Police Scotland also cleared the busiest areas of the park on two occasions due to concerns about the lack of social distancing among people who had gathered in large numbers.

The measures were taken as concern grows over the welfare of many of the young people who seek to drink to excess when visiting the park, which frequently leads to these young people becoming involved in disorder and other kinds of anti-social behaviour. With groups from across Glasgow and towns out-with the city travelling to the park, some young people aged between 14 and 17-years-old were so intoxicated they were escorted home by police officers.

Stephen Egan, the council’s Head of Parks and Street Scene, stressed that the measures to enforce the city’s bye-law that prohibits public drinking are about keeping Kelvingrove safe for all visitors. But he also highlighted that park management rules allow for people to be ejected from the park if they are causing a nuisance to others.

He said: “Kelvingrove Park remains a stunning open space, but we cannot tolerate the anti-social behaviour that is being experienced in the park. So much of that behaviour is being fuelled by alcohol and we have to take steps to protect the park for everyone who wants to visit.

“Sadly, it is young people who are invariably involved in the disorder and we are increasingly concerned that many are actually putting themselves in harm’s way.  We are very clear that alcohol is not welcome in Kelvingrove Park and we are urging parents and guardians to help us convey that message to their children.”

With the warm spell of weather due to continue over this weekend, Glasgow City Council and Police Scotland have been working on a plan to manage access to the park through a limited number of open gates on Friday and Saturday (April 23,24). Officers from the council and police will be at the gates that remain open to remind visitors of the city’s park management rules, which prohibit the consumption of alcohol within parks. Anyone seen to be carrying alcohol or who is intoxicated will not be allowed through the gates.

Chief Inspector Natalie Carr said: “Police Scotland is working closely with Glasgow City Council to prevent repeated incidents of antisocial behaviour from occurring in Kelvingrove Park.  Officers will be visible and accessible to park users should they need police assistance.

“We have received reports of children and young people getting into vulnerable situations and I would like to appeal to parents and guardians to make sure they know their children’s whereabouts. One person has already been arrested, charged and is due to appear at court following an assault on a 19-year-old.

“We would like to remind anyone planning on visiting the park that alcohol is not permitted and, should incidents of antisocial behaviour take place, then those responsible will be dealt with robustly.”

Nine of the park’s sixteen gates will be shut on Friday and Saturday and local signage will indicate where visitors can access the park.

With 100 days until eyes of the world looks to Glasgow as the place where action to save the planet will be agreed, the...

Local businesses have been awarded over £2 million in contracts to support the set-up of Social Security Scotland offices in Dundee and Glasgow. The...

Pre-register your details for the Joshua vs Usyk boxing Taking place at Tottenham Hotspurs stadium – London 25th September 2021 We are taking advance details...

The main span of the new cyclist, pedestrian and wheeler bridge over the M8 connecting Sighthill and the nearby city centre will be installed...