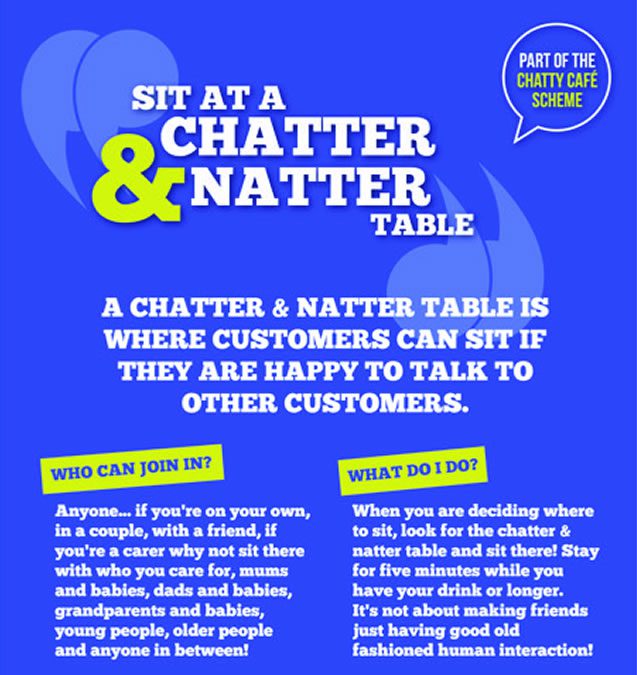 Simply passing the time of day with a stranger could bring some longed-for human contact to someone’s day.

That’s the premise of the Chatter & Natter table, within the café at St Mungo’s Museum of Religious Life and Art.

The museum’s café, run by Encore Hospitality Services, has joined The Chatty Café Scheme that is looking to include chatter and natter tables in establishments, as part of our everyday café culture.

The table, in the café, is marked with distinctive signage indicating that customers who sit at it are happy to talk to other customers, while they enjoy their refreshments.

Part of the city’s support for The Campaign to End Loneliness, a Chatter & Natter café creates a space for people to talk; whether it’s for five minutes while you have a quick cuppa, or half an hour of good conversation.

Since its inception, around six months ago, café staff noticed that the table was particularly busy during peak tourist season when tour guides and Glasgow Cathedral staff take to sitting at the table talking to visitors and residents alike.

Ann Cameron, Encore Catering Manager at St. Mungo’s, said “When we introduced the Chatter & Natter table we didn’t quite know how it would be received.

“Some days are busier than others at the table, but if it’s quiet and staff see someone sitting at it, we always make a point of going over to have a conversation with the person.

“We know that our five minute chat might just have a big impact on someone’s day.

“Recently, I also spoke to a mother visiting with her daughter, whom she cares for, who had come specifically to the cafe to sit at the table and were looking for other venues to visit.”

The scheme is now being rolled out to other Encore cafes in Bellahouston Leisure Centre, Tollcross International Swimming Centre, Kelvin Hall and Tramway in Glasgow.

The move to include other venues comes as last year The Campaign to End Loneliness revealed that more than two-thirds of Glaswegians had experienced loneliness at some point in their lives. With nine in 10 people in Glasgow believing loneliness in older age is now “more likely than ever.”