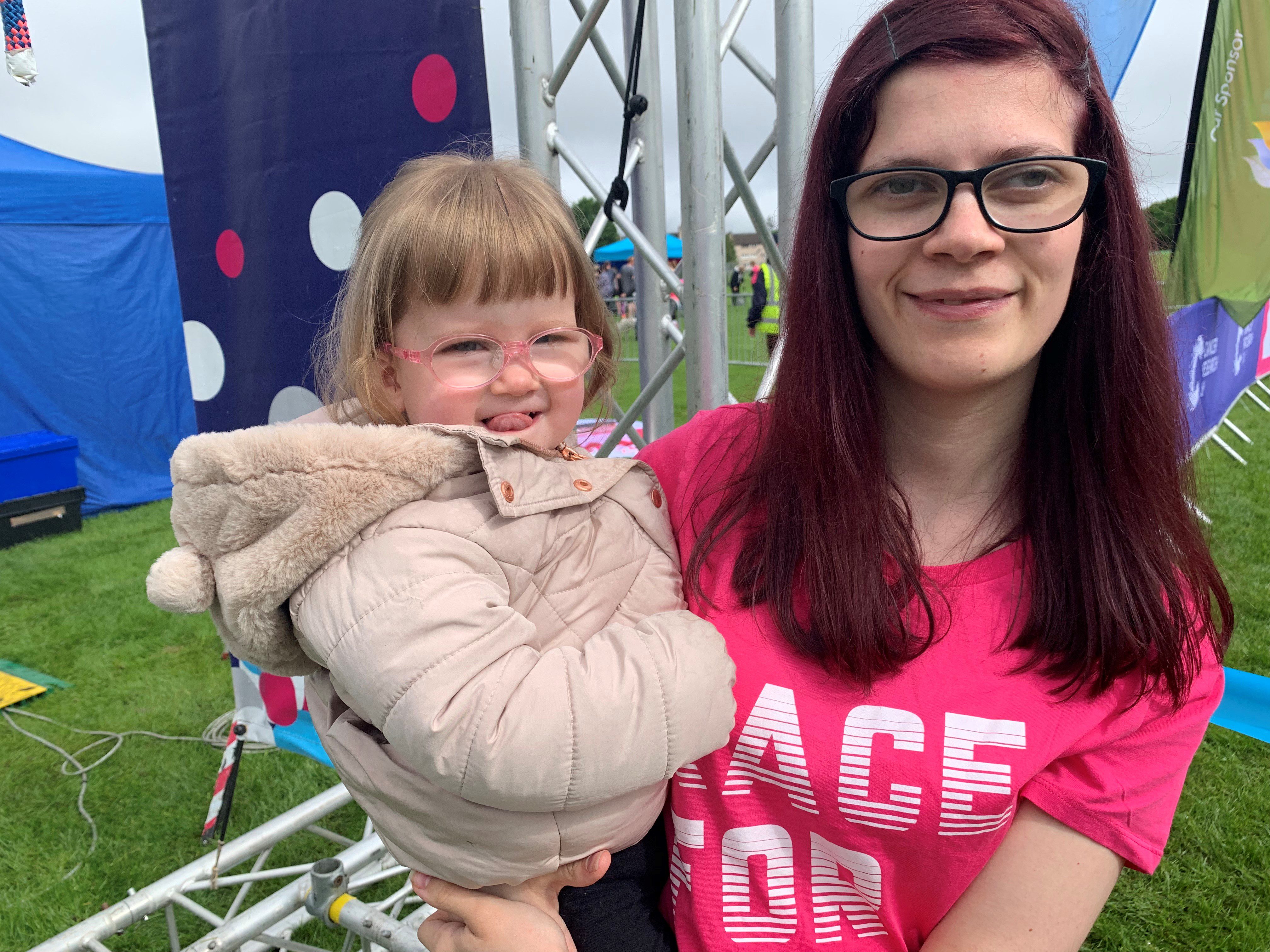 A HEARTBROKEN Inverness mum who shared her story on television led the charge against cancer at Race for Life Inverness in memory of her husband who died from the disease.

It was an emotional moment for Shannon Murphy and her two-year-old daughter Sophia as they were chosen to ring the bell to send more than 1,350 Scots on the 5K and 10K courses at Bught Stadium on May 26 to raise vital funds for Cancer Research UK. It was a special tribute to her husband Michael Murphy who was just 25 when he died on September 11 last year. Former chef Michael was diagnosed with leukaemia just two months after his wedding day to Shannon in 2016. Shannon, who also turned 20 on her wedding day, was six months pregnant with their first child Sophia.

It was while receiving treatment at Raigmore Hospital that Michael first took part in filming with Channel 4 for the campaign Stand Up To Cancer, sharing his determination to be the best dad possible for Sophia. The family’s story was watched by millions on Channel 4 during a night of fundraising last October just weeks after Michael’s death.  Shannon dedicated Race for Life Inverness to the love of her life who she misses every day. She was  cheered on by her mum, Liz MacKenzie, 53, as well as event host, MFR breakfast radio presenter, Grace Nicoll.

Shannon of Inverness said: “I treasure the Stand Up To Cancer film as it’s a chance to hear Michael’s voice one more time and make memories for Sophia.

“It means Sophia will be able to grow up hearing her daddy’s voice, knowing how much he loved her and wanted to live to watch her grow up. Michael was in hospital when I took part in the Race for Life Inverness last May. I remember spending time with Michael on the ward and all the nurses wishing me good luck as I headed off to to do Race for Life. We’re getting closer to the first anniversary of Michael’s death and it’s been the toughest year of my life. It was devastating to lose Michael but if his story can help stop other families having to go through what we did then I couldn’t be prouder.”

Shannon knows exactly how vital the power of research is to help give families more tomorrows with their loved ones. Michael was diagnosed with acute lymphoblastic leukaemia and chronic myeloid leukaemia in September 2016 after collapsing at home. He started chemotherapy treatment and three months later on December 28, the couple’s daughter Sophia was born. In June 2017 at hospital in Glasgow, Michael had a bone marrow transplant which doctors explained was his best chance of survival. He was allowed home to Inverness later that summer and the family moved in to their first house. But in spring last year, tests showed the cancer had spread to his spine and brain. He endured more chemotherapy and radiotherapy. Sadly, after that there was nothing more that could be done.

Every day, 88 people are diagnosed with cancer in Scotland and the number of people being diagnosed with cancer has now reached around 32,000 people every year.* There are Race for Life events across Scotland this spring with events everywhere from Irvine to Aberdeen, Falkirk to Fife. Money raised will help Cancer Research UK scientists find new ways to treat cancer and save lives.

Participants from as far afield as America took part in Race for Life Inverness. They included friends Christine Brown, 50, from Alaska and Jane Michaud, 47, from New Hampshire who took time out from their holiday to complete the 5K.

A team of work pals from Tesco Extra at Inshes Retail Park, Inverness also took part including employee Yvonne Charlton, 77, who took part in memory of her husband Jeff Charlton who died from lung cancer. A total of 45 pupils from Inverness Royal Academy also participated- inspired by their class mate, Mya MacKay, 15. Mya’s mum, Louise MacKay died the day before her 40th birthday in February this year from cervical cancer and already more than £1,300 has been raised by school pals.

Cancer survival in the UK has doubled since the early 1970s and Cancer Research UK’s work has been at the heart of that progress. Thanks to the generosity of its supporters, the charity was able to spend around £38 million last year in Scotland on some of the UK’s leading scientific and clinical research.

Lisa Adams, Cancer Research UK’s spokeswoman in Scotland, said: “We’d like to thank Shannon for supporting and to everyone who contributed to making Race for Life Inverness such a special day despite the rain.

“Our Race for Life events are fun, colourful, emotional and uplifting. They help people with cancer by raising money for research, including clinical trials which give patients across Scotland access to the latest treatments. You don’t have to be sporty to take part. You don’t need to train or compete against anyone else.  All you need to do is go to the Race for Life website, pick an event, sign up and then have fun raising money in whatever way you like.”

Cancer Research UK’s Race for Life, in partnership with Tesco, is an inspiring series of 5k, 10k, Pretty Muddy and Pretty Muddy Kids events which raise millions of pounds every year to help beat cancer by funding crucial research.

This year everyone can take part in the Race for Life whatever their fitness level. Because it’s not about breaking records, it’s about beating cancer.

Last year Cancer Research UK spent around £38 million in Scotland on some of the UK’s leading scientific and clinical research. A study in Inverness is looking at the best treatments for men with prostate cancer following surgery. The study aims to find out the most effective way to use radiotherapy and hormone therapy and target the men who will benefit the most from these treatments.