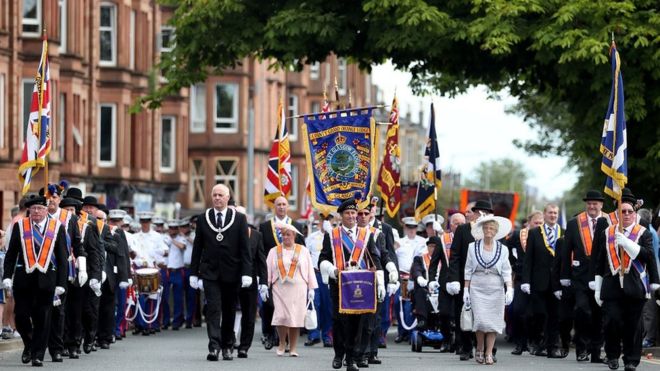 FOUR public processions have been re-routed by Glasgow City Council after police raised serious concerns about their potential impact.

The marches, which take place next weekend [1-2 June], have been re-routed away from a stretch of London Road passing St Alphonsus church.

In recent months, similar marches have prompted counter protests and also support from others in the community. Yesterday, Police Scotland advised the council that this was likely to be repeated in response to next weekend’s events – and raised concerns regarding the potential impact on the wider community.

Police also advised it would be necessary to call in officers, including specialist resources, from across Scotland in order to safely manage the marches and any protests.

Under normal circumstances, such concerns would be put to a Public Processions Committee for consideration. However, the timing of the marches relative to the holiday weekend mean it would be impossible to do this while still allowing organisers adequate opportunity to exercise their right to appeal any order that may have been made by the committee.

In order to preserve that legal right, while responding appropriately to the clear concerns raised by Police Scotland, officers have made the orders to re-route the marches using their delegated powers.

In each case, the order has been made due to the high risk of disruption to the life of the community and the excessive burden likely to be placed on Police Scotland, should the proposed route be used.

The orders do not prevent any of the events from going ahead on the amended route and preserve the participants’ right to assembly. Failure to comply with the orders is an offence.

The processions affected are:

A spokesman for Glasgow City Council said: “Police have raised significant concern about the impact of these marches and counter protests – both on the local community and their own resources.

“The council’s decision to re-route the processions is proportionate and maintains the participants’ right to assembly while addressing those concerns.”