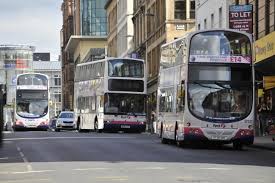 New traffic measures that will ensure priority for buses on two of the busiest bus routes in Glasgow city centre will come into effect on September 2 this year.

Amid steadily falling bus passenger numbers, the new measures will improve journey times and reliability of bus services on the north and southbound routes either side of Central Station, which can carry up to a total of 360 buses every hour at peak times.

The bus gates on Union Street and Oswald Street will act as a traffic filter that allows access to these streets for buses, taxis, private hire vehicles, bikes and goods vehicles.

Originally proposed in the 2014 City Centre Transport Strategy, the bus gates will cut the number of vehicles and delays on these roads between 7am and 7pm each day. A reduction in traffic around Central Station will improve both air quality and road safety for the thousands of pedestrians who use the area every day.

Councillor Anna Richardson, City Convener for Sustainability and Carbon Reduction, is fully behind the bus gates as a part of the council’s efforts to support the city’s bus operators and promote greater use of more sustainable forms of transport.

Councillor Richardson said: “It is vital we do everything that we can to sustain public transport in a city where almost half of our population has no access to a car. The bus remains the most significant form of public transport in Glasgow, but the bus sector is facing a challenging future.

“Giving buses priority on key routes gives operators the chance to run the kind of reliable and efficient services that people want to use. By providing clearer channels for buses to travel along, we can reduce delays and get closer to the bus industry target of ‘on time every time’.

“These new measures will improve journey times through the city centre and help to make the bus a more attractive travel option in Glasgow. Reducing traffic in such a busy part of town will also reduce the emissions that pedestrians breathe in and simply make it safer for people to walk around. “

The new gates will filter traffic on Oswald Street between Midland Street and Argyle Street with restricted access on Union Street to be between Gordon Street and Argyle Street between 7am and 7pm each day. As part of the new measures, the number of disabled parking bays on West Nile Street will be increased to account for the loss of access to Union Street.

Alternative routes using Wellington Street and Robertson Street for southbound vehicles and York Street and West Campbell Street for northbound vehicles are being suggested with diversion signs in place initially. Temporary variable message signs will also be placed at key locations in the city centre to advise drivers of the forthcoming changes.