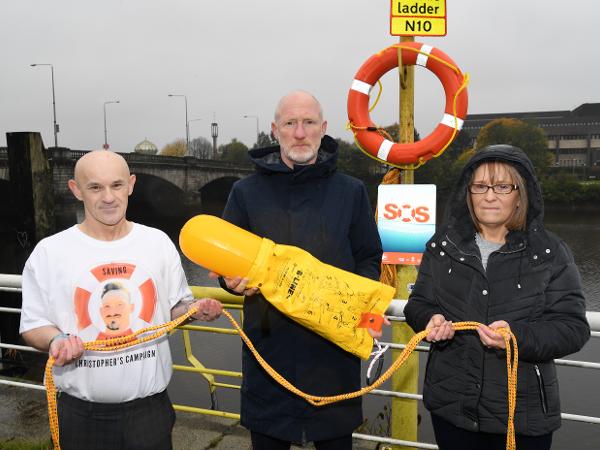 A new distinctive design for throw ropes attached to River Clyde life belts has been introduced with the aim of thwarting thieves and vandals.

Unique to Glasgow following consultation with rope makers, the yellow, orange and purple ropes are being added to city centre life belts following a successful campaign by Duncan and Margaret Spiers. The Glasgow couple have been pushing for enhanced river safety measures after their son Christopher accidently drowned in the Clyde in January 2016.

Adding ropes to lifebelts makes the belts easier to use in emergency situations and increases their life saving potential, but the throw ropes are regularly stolen while lifebelts are also routinely vandalised.

In April this year the council trialled the addition of standard throw ropes to 22 city centre life belts, but following a spate of thefts in July only seven remained in place. Since July a further 30 standard ropes have been attached to city centre lifebelts but at the most recent count, 23 had been stolen.

By adopting a unique and distinctive design for throw ropes, it is hoped that thieves will be deterred from taking a readily identifiable piece of life saving equipment from the banks of the Clyde. In total 70 ropes have been installed on to lifebelts between Albert Bridge at the east of the city centre and Bell’s Bridge in the west.

Andy Waddell, chair of the multi-agency Glasgow Water Safety Group, which has helped to steer the introduction of the ropes, expressed his disbelief that anyone could compromise the rescue of someone in distress in the water.

He said: “It is truly staggering that anyone could steal a life belt throw rope, knowing that it could put someone’s life at risk. Sadly this is an issue that has historically dogged Glasgow and shame should be heaped upon those who undermine the city’s river safety.

Following the campaign by Duncan and Margaret Spiers, purple thread was added to the rope in memory of their son Christopher, who was only 28-years-old when he died. Duncan and Margaret both joined Andy to install the first of the new throw ropes at a lifebelt station on the walkway next to Clyde Street. In total 70 ropes have been installed on to lifebelts between Albert Bridge at the east of the city centre and Bell’s Bridge in the west.

Duncan said: “The death of Christopher is something that we have to live with every day. But we have wanted to turn our loss into something positive and we are doing everything we can to make our rivers as safe as possible.

“Christopher was only in the water for a matter of minutes and emergency services were right there at the time. So every second counts and adding the throw ropes to the lifebelts can make all the difference. Even if the life belt doesn’t reach the person in the water on the first throw, the rope means they can try again until the person hopefully makes it to safety.

“But if a rope is missing and you then have try another lifebelt, it is very easy to lose sight of someone in the water and in that short time that person could easily lose their life. A throw rope is cheap, but a life is precious. Taking ropes or lifebelts is costing lives and people need to think twice before doing this.”

“We are really grateful to the Water Safety Group for the backing they have given our campaign. If the ropes are successful in Glasgow then we hope they can be used by other local authorities too.”

As part of the throw rope initiative, enhanced CCTV support is also being put in place in an effort to identify the culprits who steal the ropes.

New buoyancy throwbags are also being introduced along the river, which are lighter and easier to throw to someone in the water.