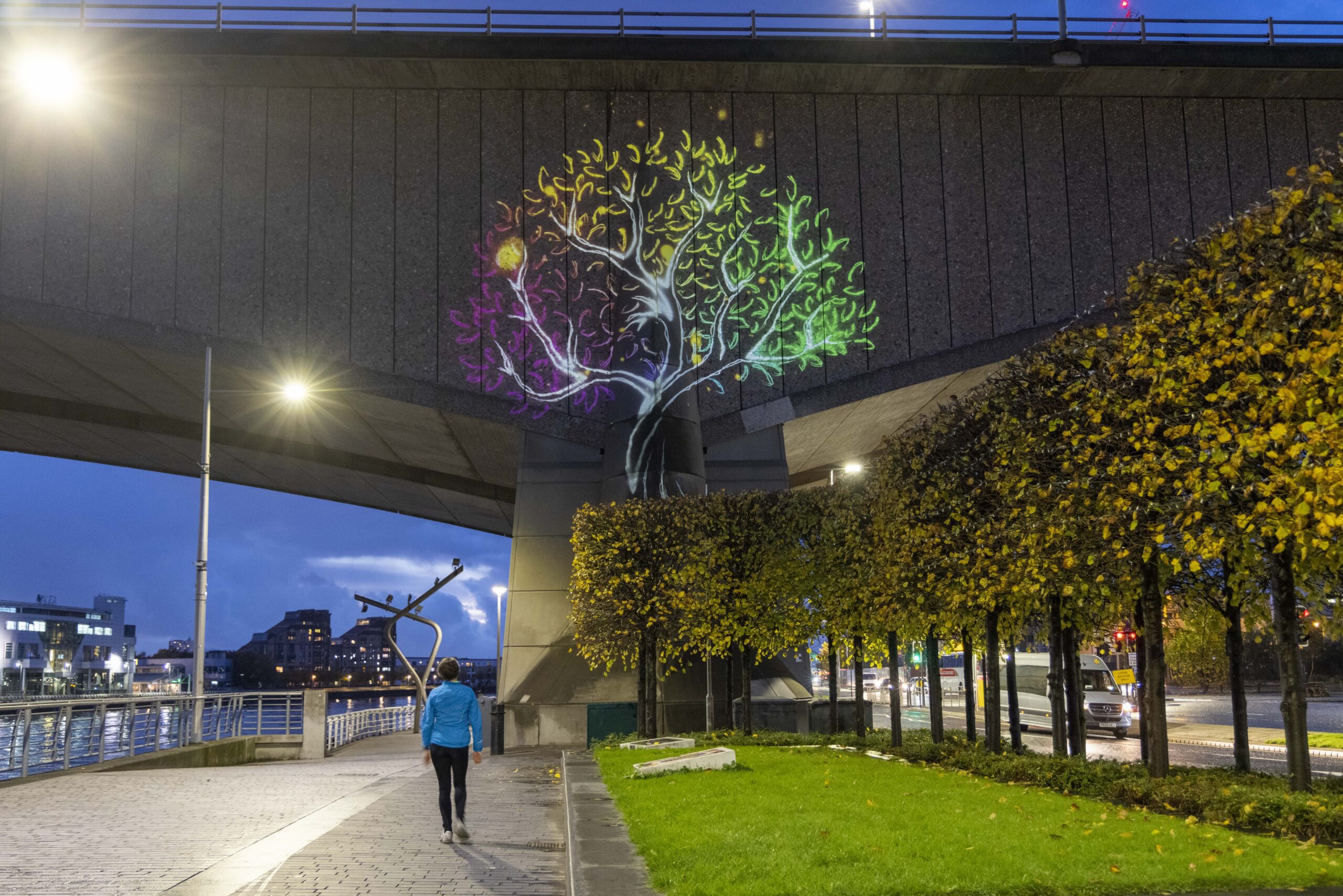 To mark the 2021 United Nations Climate Change Conference (COP26), Glasgow’s Kingston Bridge has been transformed with a projection of a new piece of artwork highlighting the climate challenges ahead.

The artwork ‘Flourish’ is a new commission by Rabiya Choudhry specifically created for the summit, that has the ambition of accelerating action towards the goals of the Paris Agreement. The artwork by Choudhry has been inspired by one of Glasgow’s mottos “Let Glasgow Flourish”, from the city’s coat of arms.

The artwork was commissioned as an original painting by Glasgow City Council which has been animated and projected onto a section of the Kingston Bridge. The work presents a large brightly coloured flower that has an anamorphic Earth at its centre, surrounded by a cyclical pattern of flames, leaves and fish. The flower’s stem has a lawn green pattern with two large cloud filled leaves protruding. Choudhry’s intention with the artwork is to inspire hope while also highlighting the obstacles we face as we tackle climate change.

Artist Rabiya Choudhry commented: “I wanted to make an artwork that was fun, and that symbolises hope in the face of the overwhelming adversity we all face now. It’s also significant that the artwork will be projected in one of the most industrial parts of the city. The earth and flowers are recurring motifs in many of my recent paintings about grief and loss and the feeling that your world ends when you lose loved ones.

“We are all facing the potential loss of the world due to the increasing threat within the climate crisis, and we must find a way towards a brighter and more hopeful future. It really is now or never.”

Councillor Angus Millar, Chair of the Environment, Sustainability and Carbon Reduction Committee at Glasgow City Council, said “Projections such as ‘Flourish’ are a fantastic way for us as a city to illustrate to locals and visitors that Glasgow recognises what is at stake as we work to address the climate emergency .

“Climate justice and social justice must go hand in hand, especially in a city such as Glasgow as COP 26 host. This artwork and its location give us a flavour of the conversations taking place over the coming weeks and the themes emerging from it.”

The bridge features a second tree, developed by Double Take Projections, which will evolve into a Christmas inspired tree for the duration of the festive season as a legacy of the historic climate conference.