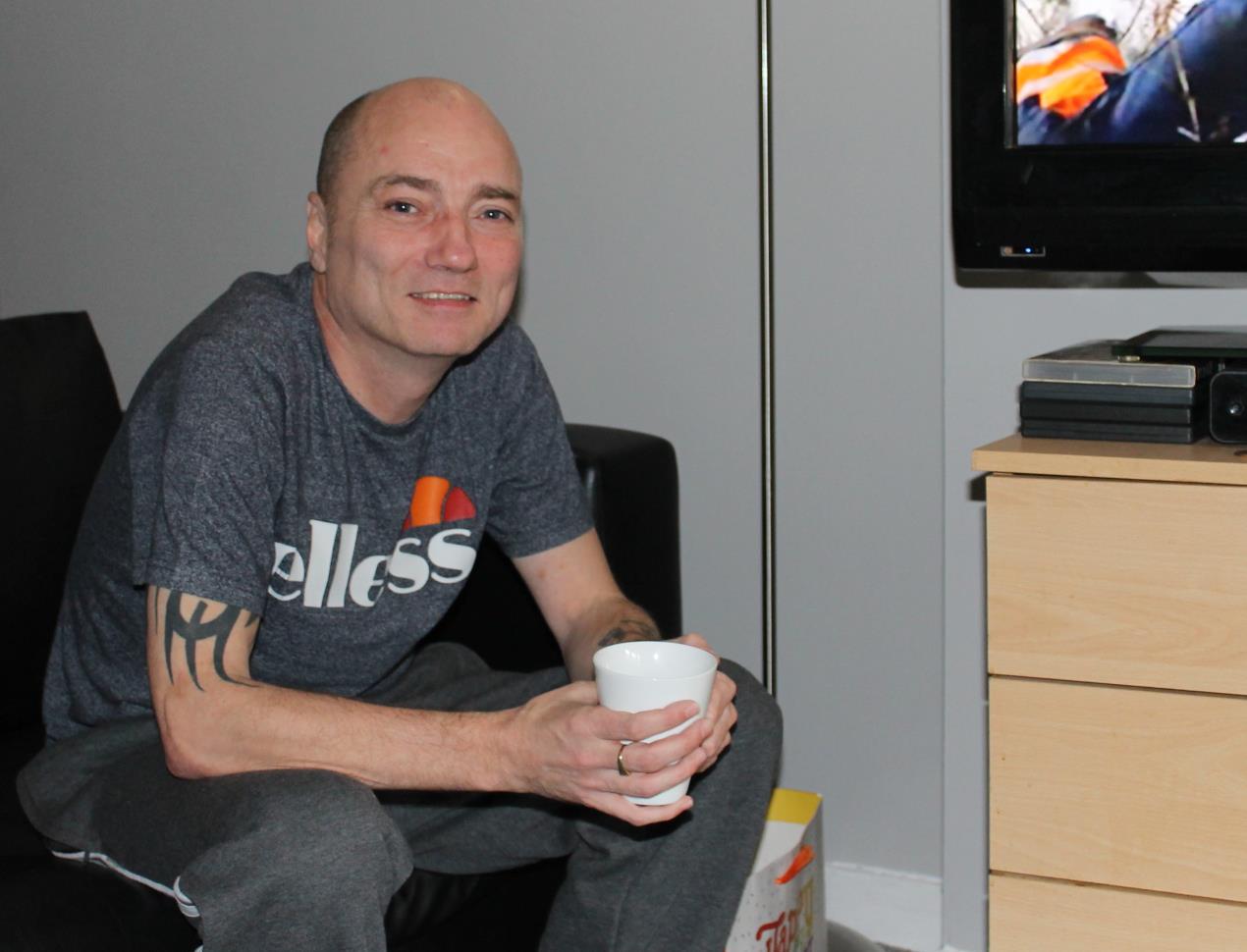 Paul Gallacher is among people who have been found settled mainstream tenancies under Glasgow’s Housing First initiative.

The 47-year-old has moved into a one bedroom tenement flat in Tollcross, the area he grew up in, and is now in the process of decorating and furnishing his new home with support from his case worker.

Paul became homeless after a chain of events sparked by the end of his eight year marriage in 2007.

The former painter and decorator, who suffers from anxiety and depression, said: “I had it all – a house, a family, a caravan in the drive and foreign holidays. But my life was destroyed in the blink of an eye.”

After the split, the father-of-one sought solace in alcohol and later returned to Glasgow to live with his mum and dad in the East End.

A hand injury halted his decorating career and tensions caused by his drinking, meant he could no longer stay with his parents following an argument in April 2018.

Paul got in touch with Glasgow’s homelessness services and was found temporary accommodation – latterly moving to a hostel in Tollcross where he spent nine months.

The closure of the hostel in Carmyle Avenue is part of Glasgow’s Housing First strategy which involves moving away from hostel accommodation to quickly providing settled mainstream accommodation for people with complex needs such as drug and alcohol addictions.

Intensive support from case workers helps people maintain their tenancies – advocating on their behalf with utility companies, the DWP and other agencies about household bills etc. In a partnership approach, this help is co-ordinated with support for any health or medical conditions people have.

Paul, who suffers from seizures, said: “Being homeless was terrible. At the hostel I just had a wee room, which was about the third of the size of my new living room, a tiny kitchenette and a shared bathroom.

“Now I’ve got this flat and all this space. My flat’s in the area where I wanted to live and I don’t have to share a bathroom – mine even has a new suite fitted. In the hostel the ceilings were so low I could reach up and touch them. Here I have high ceilings.

“At first, I was worried when I heard the hostel was closing, but the other night I was sitting on my sofa watching TV and I suddenly realised, I don’t have to worry anymore. I’m happy with what they (homelessness services) have found me.”

£1500 from Social Bite has helped him furnish his flat, which is rented from Tollcross Housing Association, and his parents are helping him to fit his carpets and put up shelves and blinds.

Support from his Housing First case worker is helping Paul adjust to independent living –  living alone after being in a busy hostel surrounded by other people can be a major adjustment for people.

Paul said: “This is a big step for me, but also a responsibility. I’ve got to take care of myself. I can settle down and get a new partner. I can see more of my daughter who is 18 now and my mum and dad have been round every day to help me get organised.”

Councillor Mhairi Hunter, Glasgow’s Convenor for Health & Social Care, said: “I’m delighted that the city’s Housing First programme is enabling formerly homeless people with complex needs to move out of hostels which were unfit for the 21st century into their own settled tenancies. The intensive support provided under the scheme is also helping people re-adjust to independent living and maintain their tenancies – avoiding the cycle of repeat homelessness.

“The hostel closures are part of plans to improve and modernise the city’s homelessness services and get people into settled homes faster. Going forward, we will still need temporary accommodation for crisis situations, but our Rapid Rehousing Transition Plan aims to ensure that is of a better quality. Organisations which previously provided hostel accommodation are still able to provide support, but to people living in their own homes.”

Caption: – Paul Gallacher is enjoying his new home following the closure of a hostel in Tollcross.