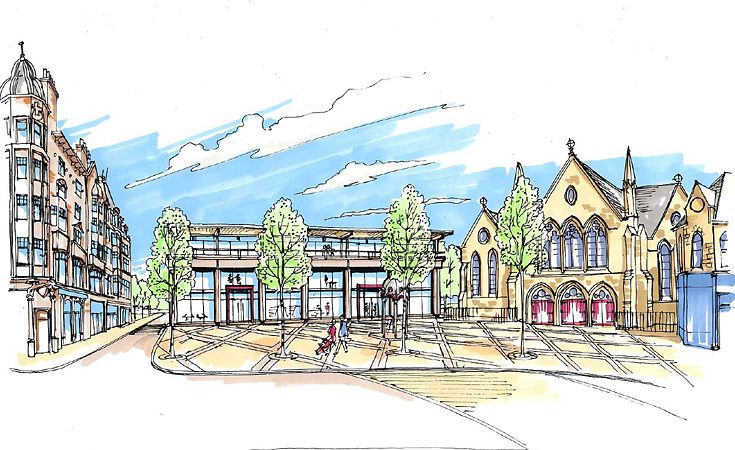 Glasgow City Council was today (2 October) given a report outlining the ongoing success of the regeneration of Central Govan, with investment of around £90 million since 2006, and plans for the area’s future.

This investment has seen new homes, business and community space in Govan as well as more attractive streets, shops and public spaces.

The council’s Neighbourhoods, Housing and Public Realm Committee considered the report, which focused on the two main programmes in the area, the Central Govan Action Plan (CGAP) and the Govan Cross Townscape Heritage Initiative (GCTHI), both of which are award-winning projects.

CGAP – established in 2006 – is a community-led partnership and investment framework that guides the physical regeneration of Central Govan, and GCTHI is a grant giving programme funded by Glasgow City Council, Heritage Lottery Fund (HLF), and Historic Environment Scotland (HES), that aims to regenerate Govan town centre by both investing to make the best of Govan’s exceptional historic built environment and using local heritage as a vehicle for community learning and skills development.

CGAP Regeneration Strategy has more recently focused on realising the potential of Govan’s waterfront through the masterplanning of the strategically important Water Row site – as a location with over 200 new homes and over 3,550 square metres of commercial space – and the redevelopment of the A-Listed Govan Old church as a major cultural destination featuring the Govan Stones and an enterprise hub with over 800 square metres of high-quality office space on the river’s edge.  The restoration and re-use of the B-Listed Lyceum – a former 1930s ‘super-cinema’ – as a community-owned concert and events venue and the implementation of active travel routes are other key CGAP priorities.

The first five-year phase of GCTHI operated from 2009-2015 and resulted in £4.3million investment levered into Govan, and a second phase, including an HES-funded Conservation Area Regeneration Scheme was launched in September 2016, running to 2021. Phase 2 is expected to lever £5.8million investment to the area, based on a Common Fund of £4.118m (HLF £1.8m, HES £1.0m and GCC £1.3m).

Significant progress has been made on the delivery of the GCTHI’s second phase, including work on four of the six targeted listed buildings to be repaired – Govan & Linthouse Ancillary Building, where four new apprentices from local company John Fulton Plumbers have been employed, 883 Govan Road, the former Hills Trust School and Govan Old.  In addition, the third and final phase of public realm improvement at Govan Cross will begin in early 2019, and GCTHI is funding improvements to the Govan Old entranceway and the Govan War Memorial, as well as facilitating community engagement including an archaeological dig that aims to increase visitor numbers to Govan Old.

Other ongoing GCTHI projects are a £850,000 Traditional Shopfront Improvement Grant Scheme, with 28 shops currently involved in appointing a design team before work begins in Spring 2019, and a number of community learning and training projects have been delivered with notable highlights including a songwriting project and series of concerts that introduced a new audience to Govan Old.

Councillor Kenny McLean, City Convener for Neighbourhoods, Housing and Public Realm at Glasgow City Council, said: “These programmes have made a huge contribution to the regeneration of Central Govan in recent years, with new homes, business and an improved environment showing the potential of the area as a place in which to live, work and visit.  I am delighted to say that the future work proposed, combined with other projects such as the Govan-Partick bridge, will continue this trend to make full and proper use of the fantastic resources that Govan has as its disposal.”