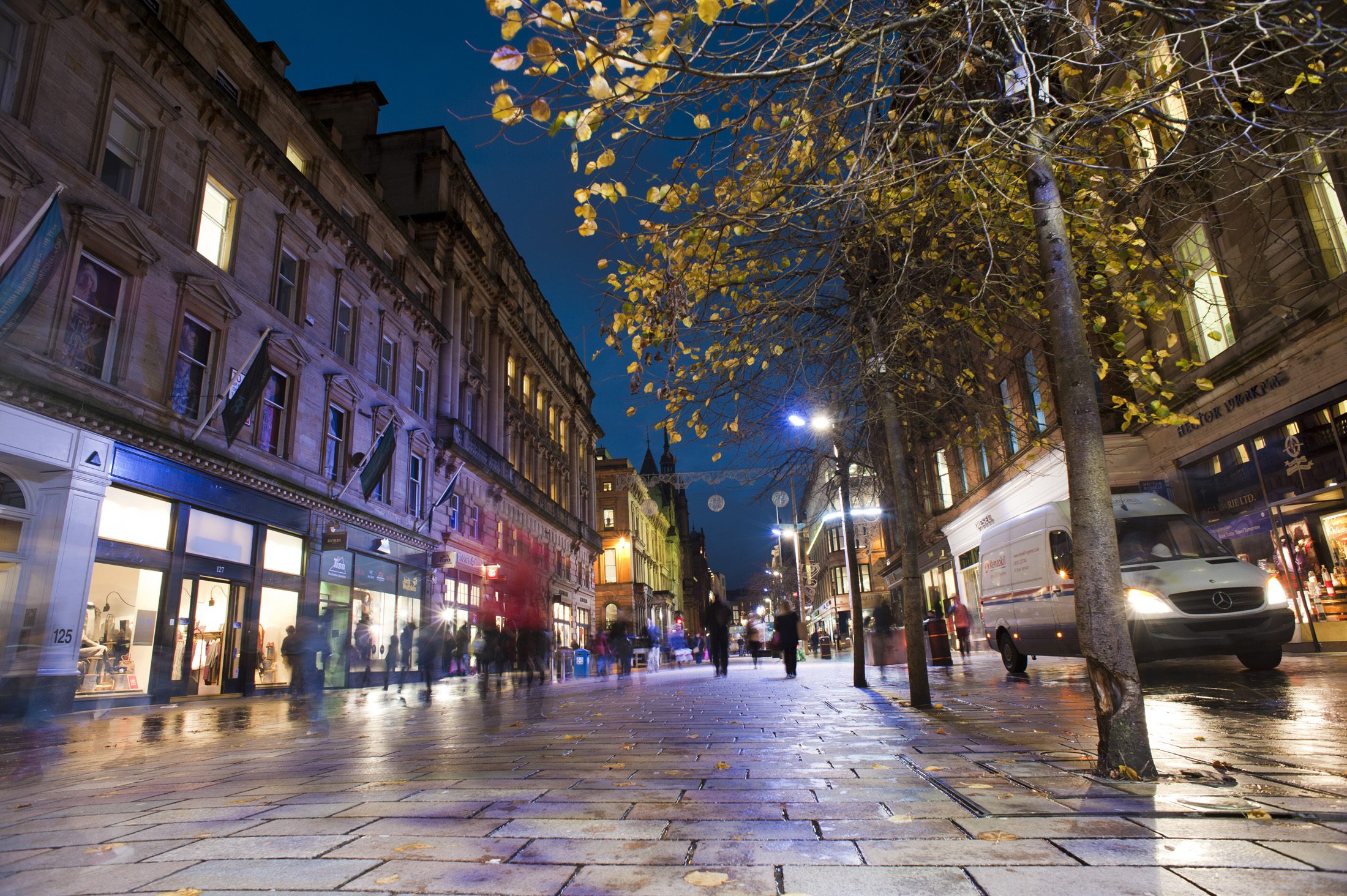 Colourful night scene in Buchanan St, Glasgow with illuminated lights in the retail shops and pedestrians walking about

Glasgow offers many sightseeing opportunities for tourists and why not, also locals. Glasgow has it all; art, culture, history, nightlife, Casino Sites, restaurants, bars, and everything you may be looking for. Let’s see some of the top Glasgow attractions so we may rediscover Glasgow this year!

George Square was named after King George the Third. There are various monuments on it. Set up around the square you will find, among other things, various statues of famous Scottish men. Thomas Graham, for example, a well-known chemist and many more. A white war memorial also commemorates the war participants.

During our stay, it was decorated with wreaths and crosses. The town hall is located at the end of George Place. Another very impressive building is lined with two lions. The former post office was also located there.

But why isn’t there a statue of King George in George Square? Well, that’s because George lost the Scottish colonies in the US. And not only jeopardized fame and honour in his hometown Glasgow but also lost a lot of money.

So he was, so to speak, ostracized by not having a monument erected of him. But at least the most central square in Glasgow bears his name.

In general, the following applies in Glasgow: Entry to all museums is free. Because art should be accessible to everyone. That alone impressed us.

The Museum of Modern Art offers insight into modern art in various galleries and floors. It is located in the centre of the city and cannot be overlooked. The building is incredibly imposing. From Andy Warhole to other artists you can see really exciting works here.

What we liked most was advertising prints, modern photography, and cynical text compositions that were specially projected. So definitely worth seeing. There is also a nice café in the museum.

The name alone made us so curious that we had to pay a visit to the museum. This is not a real museum, but rather a creative composition of exciting exhibitions.

Large, illuminated letterings in front of the entrance point to The Lighthouse, the well-known designer Macintosh, and other parts of the exhibition. These are placed between the narrow streets and lead visitors directly to the entrance.

For the 150th birthday of Macintosh in 2018, The Lighthouse is also dedicating an exhibition to the well-known creative. Our way led us through the Macintosh area directly to the right lighthouse. A narrow spiral staircase – typical for lighthouses – takes the visitor to a platform.

From here you have a fantastic view of the whole city. Photographed from below, the stairwell looks like a snail. From above you have a clear view of the great city with its nested alleys, the old towers, buildings worth seeing, and generally of the river Clyde.

You shouldn’t miss the largest train station in Scotland. When you enter the Central Station, you suddenly have the feeling that you have been beamed back to the year it opened – 1879. The facades of the shops and the old tracks all seem to have stood still at one time.

A patisserie has been in this spot in the main train station since 1926. The old clock, which is mounted centrally on the ceiling of the Central Station, also dates from this time. It is also a very popular photo opportunity with tourists.

But the complete ceiling and roof construction of the Central Station with its steel girders and glass surfaces also looks like an ancient building on a sunny day. So it’s worth taking a look. It’s very impressive there.

The Caledonian Railway Bridge offers a particularly great photo opportunity. Especially just before sunset. When the light breaks on the bridge. The old bridge and the tracks lead directly into the Central Station.

Also located on the river, right next to the Central Station and the Railway Bridge is the old pedestrian bridge, the Suspension Bridge. With its pink struts and steel structures, the bridge is well worth seeing for photo freaks.

Probably the biggest highlight in Glasgow is the Kelvingrove Art Gallery. It is the most visited museum outside of London. Just the large hall where the visitor first enters is overwhelming. You can also see a huge organ that is played daily.

The organ is played every day at 1 p.m. and on Sundays at 3 p.m. In the next hall, there is a great installation by Sophie Cave with huge heads that are illuminated with different colours.

In the next large hall on the ground floor are the two oldest exhibits in the museum: a large elephant and an airplane. Children, in particular, can go on an exciting journey through time through different continents.

The first floor houses the exhibitions of the famous Salvador Dali as well as Scottish paintings.

Many Scottish paintings also dealt with the history of Scotland. The art exhibition is also well worth seeing. The architecture of the Kelvingrove Art Gallery is a Mecca for photographers. This place is breathtaking.

We strongly recommend a street art tour. The works of art that you will see are all great and exciting. From giant pandas and tigers to large artist portraits, everything can be admired in the streets of Glasgow. So looking at the works of art on the walls is worth it.