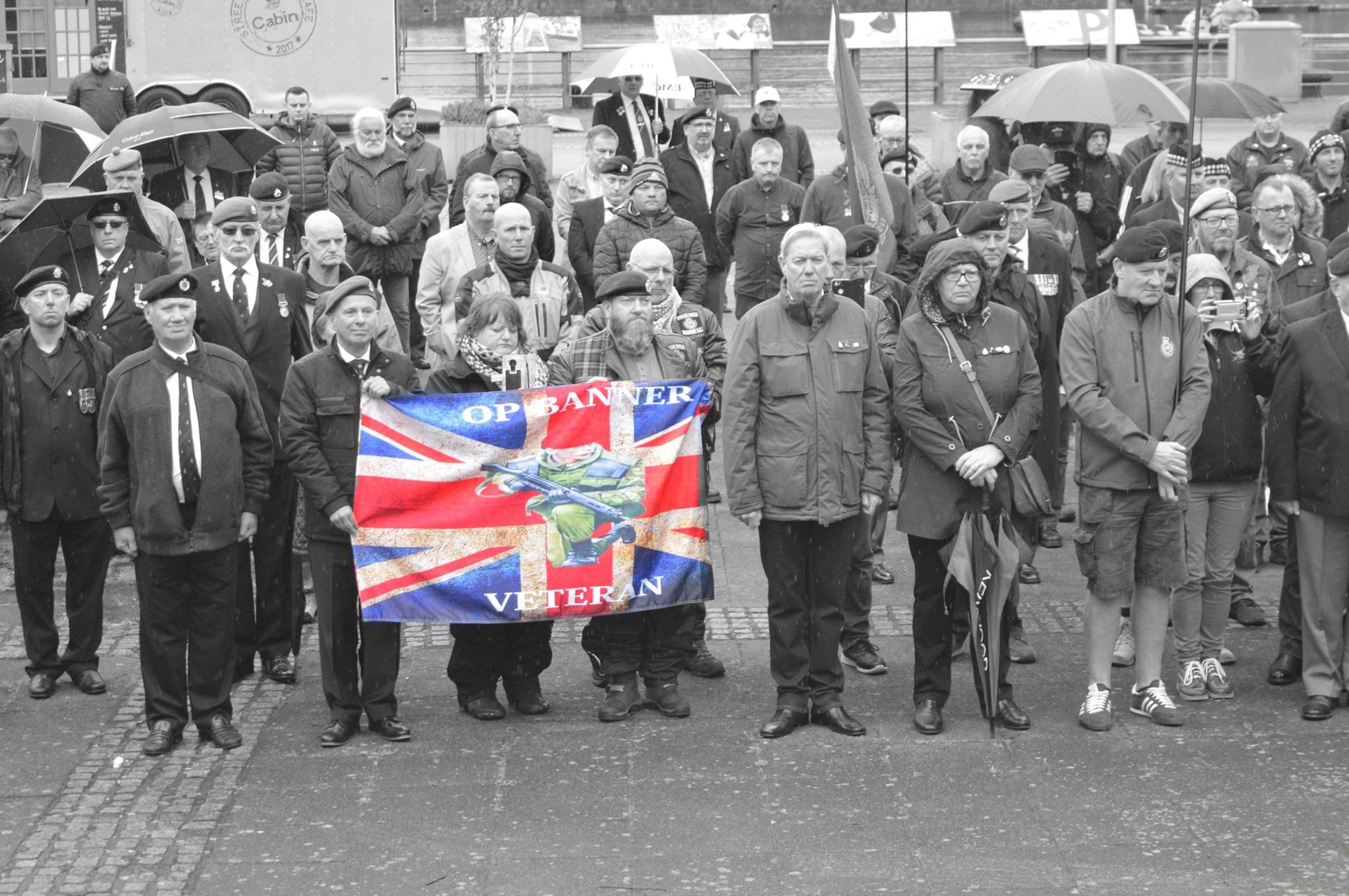 Rallies against the prosecution of former British soldiers who served in Northern Ireland have been held across the UK including Glasgow.
Hundreds of people – many of them waving banners in support of an Army veteran being prosecuted for the murder of two men on Bloody Sunday – protested outside BBC Scotland in Glasgow.  Rallies were also held in London, Cardiff, Bristol and Northern Ireland.

Justice for Northern Ireland Veterans Scotland organised the event, follow the announcement by Defence Secretary Penny Mordaunt earlier this week that British troops and veterans would be given stronger legal protections against prosecution – proposals that exclude alleged offences in Northern Ireland.
Six former soldiers who served in Northern Ireland during the Conflict are currently facing prosecution.
In the case of Bloody Sunday, a former British soldier known as Soldier F faces prosecution for the murders of James Wray and William McKinney in Londonderry in 1972. They were shot dead at a civil rights march.
The decision to exclude soldiers who served in Northern Ireland during the Conflict angered protesters outside the BBC in Glasgow, as many veterans expressed anger at what they say is a lack of media coverage of the issue.

One elderly veteran added: “Ex service-personnel didn’t ask to go to Northern Ireland, they were sent there, following orders. So if anything, the government was to blame, not the individual soldier.”
The Public Prosecution Service in Northern Ireland has said that of 26 so-called Conflict legacy cases it has taken decisions on since 2011, 13 related to republicans, eight to loyalists, and five were connected to the Army.  The rallies on Saturday were the latest in a series of protests over the last few months, including the Million Veterans March.

Suzanne Fernando, Founding member of Justice for Northern Ireland Veterans Scotland said: “I felt honoured to have been in the company of Retired Lt Colonel John Charteris MBE MC and the one and only Mr Dennis Hutchings, both of whom I have the upmost respect and admiration for.  Last Saturday we had a phenomenal day with 900 on parade and a further 100 non marchers attending, the constant sound of applause and support from the crowds melted my heart and will stay with me forever, but the lack of media attention was evident which is why we chose to join forces by taking part in the rally outside the BBC.  Our group has given those of us who served in Operation Banner “one voice”. It’s allowed us to show our complete dismay at the betrayal we have faced at the hands of our politicians.  Veterans like Dennis Huchings, Soldier B and soldier F need closure, we all need closure, the government need to stop ignoring us, get their heads out the sand, tear up the good Friday agreement and apologise to each and every soldier they’ve put through hell as a result of this ridiculous witch hunt.

So many terrorists had the slate wiped clean as a result of the Good Friday Agreement. How can evidence after 40/50 years possibly be sound?  Something needs to change and it needs to change NOW.  No human being should have to endure what our brave heroes endured, they deserve nothing but respect and admiration for serving their Queen and Country, instead almost 50 years later they continue to be persecuted, woken up in the middle of the night and arrested.  We now hear that Soldiers and veterans are to get greater protection from historical war crimes allegations who served abroad, However, any new measures would not apply to cases arising in Northern Ireland.  Why not?
We who served in NI are the NEW FORGOTTEN ARMY it seems!
Our veterans are the most important people in our country, because without them you wouldn’t have a country so let’s put a stop to this once and for all.”