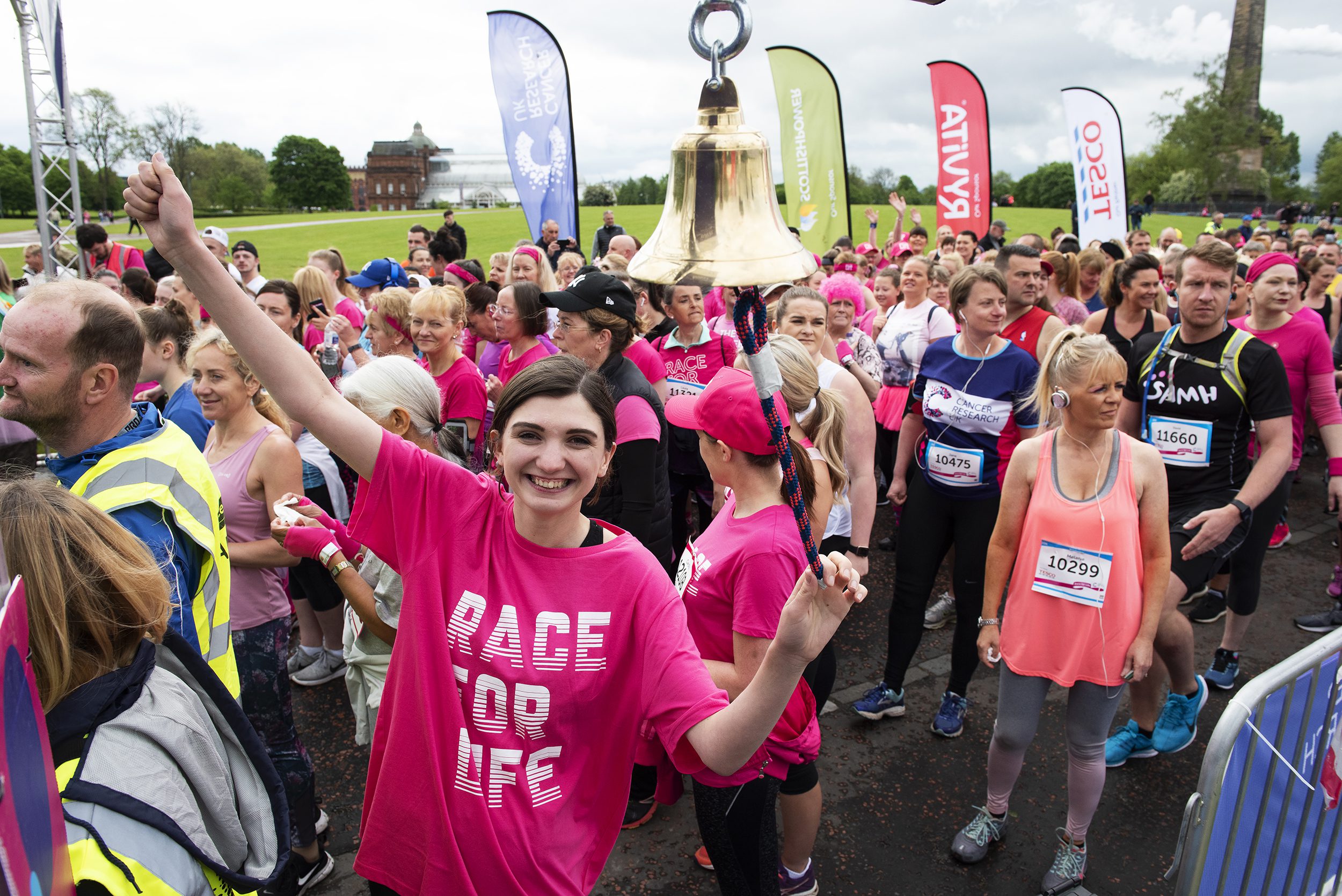 PICTURES COURTISEY OF CANCER RESEARCH UK FIRST USE ONLY Runners at the finish line. Race for Life Glasgow 2019.

COURAGEOUS Sara Wilson who beat cancer as a student but lost her dad to the disease launched Scotland’s biggest Race for Life today which marked its 25th anniversary.

Sara aged 25 was chosen as VIP to kick off Cancer Research UK’s Race for Life Glasgow. She sounded the bell to send around 6,500 participants on the 5K and 10K courses from Glasgow Green and was cheered on by event host, Heart Scotland’s Des Clarke. Glen Griffiths, 13, of Clarkston who is a member of the Giffnock North running club was the first home, completing the 5K in 19 minutes 57 seconds.

The event also included 18 members of the Strathaven Superhoopers who power hooped their way through the entire 5K course. An incredible £20 million has been raised in Glasgow to fund gentler and more effective treatments for cancer since Scotland’s first Race for Life event was held in the city in spring 1995. Money raised every year helps scientists find new ways to prevent, diagnose and treat the disease, helping save more lives.

Runners at the finish line.
Race for Life Glasgow 2019.

Sara who was only a baby when Race for Life first started knows exactly why raising funds to give others more tomorrows is vital. Her dad Derek Wilson who was a keen runner was 47 when he died from skin cancer on Boxing Day 2008. Sara, who was studying for her school exams at the time, was devastated. She went on to win a place at university but it was a hammerblow when she was diagnosed with Hodgkin Lymphoma- a cancer of the white blood cells- just before her 21st birthday.

Sara of Dennistoun, Glasgow said: “Cancer scares me as it has taken away so much from my family.

“It broke my heart when my dad died. Dad knew he was going to die and worried about telling me when I was studying for my exams. But losing Dad spurred me on. I was determined to pass my exams, to go on and achieve everything I could in life that would have made Dad proud. That’s why it felt unfair so soon afterwards when I found myself listening to a doctor telling me that I had cancer.”

Sara, who is now clear of cancer, also took part in the Race for Life Glasgow today with her boyfriend, Ross Alexander, 27. It was an emotional moment as Sara crossed the finish line and recalled everything she’d been through. She was studying criminology at Abertay University when she started feeling unwell, developing a lump on the left side of her neck, suffering night sweats and constant feelings of exhaustion. After a series of blood tests, nothing could have prepared her for the news on October 30 2014 that she had cancer. Sara’s step mum, Lillian Snowden drove straight over to Ninewells Hospital in Dundee to help Sara.

Sara said: “I was in shock but my step mum just dropped everything to be there for me.

“She’d already supported my dad through cancer and she knew what to do. I don’t know if I could have got through it without her but she was calm and positive. I have so much to thank her for. Sometimes in life you just need a hug from someone who knows you really well and cares.”

Doctors warned that cancer treatment could affect Sara’s chances of having a baby in the future so advised a cycle of fertility treatment to freeze her eggs. Sara then went to Disneyland Paris for a surprise weekend away to celebrate her 21st birthday before starting cancer treatment in February.

PICTURES COURTISEY OF CANCER RESEARCH UK
FIRST USE ONLY
Runners at the finish line.
Race for Life Glasgow 2019.

Sara endured 12 cycles of chemotherapy over six months. A low point was losing her long dark hair due to side effects. She had her final chemotherapy treatment on July 9 2015 which should have been her university graduation day. Instead Sara faced another year before graduating but tests showed she was clear of cancer.

Sara said: “My step mum took me on an amazing holiday to Disneyland in California that summer when I finished treatment.

“I had loved Disney as I was growing up. Even now as an adult, Disney reminds me of a nicer, simpler time. It brings back good memories of my dad too.”

And Sara who completed the Glasgow half marathon just months after completing treatment has wise words for anyone going through cancer today.

Sara said: “Everyone is different so do what you need to do to get through cancer.

“Cancer changed me. I’m definitely stronger. I’m more likely to take chances and grab opportunities now. I remember one of the cancer nurses saying, ‘remember, you’re only in your twenties. It’s so important to still live your life.’ I hope Dad would still be proud of me and by doing this I’ll help others who are going through cancer right now.”

Cancer survival in the UK has doubled since the early 1970s and Cancer Research UK’s work has been at the heart of that progress. Thanks to the generosity of its supporters, the charity was able to spend around £38 million last year in Scotland on some of the UK’s leading scientific and clinical research. Glasgow is home to the Cancer Research UK Beatson Institute where a thriving community of cancer scientists and doctors are working to reduce the impact of this disease around the world. An exciting programme of work has been established to look for ways to tailor treatment for pancreatic cancer. Our scientists in Glasgow first manufactured the brain cancer drug, temozolomide. Thousands of people now benefit from treatment with this drug worldwide.

Lisa Adams, Cancer Research UK’s spokeswoman in Scotland, said: “We’d like to thank Sara and everyone who came along to make Race for Life Glasgow in its 25th year so successful.

“One in two people in the UK will be diagnosed with cancer, at some point during their lifetime.  Sadly, this means nearly everyone is touched by the disease, either directly or through a loved one or friend.  To make a significant difference in the fight against cancer we need to harness as much energy and commitment as possible – so what better way than involving everyone in the community in our events.

“It’s a perfect example of everyday people doing an extraordinary thing – uniting in a common cause to beat cancer.”

Cancer Research UK’s Race for Life, in partnership with Tesco, is an inspiring series of 5k, 10k, Pretty Muddy and Pretty Muddy Kids events which raise millions of pounds every year to help beat cancer by funding crucial research.