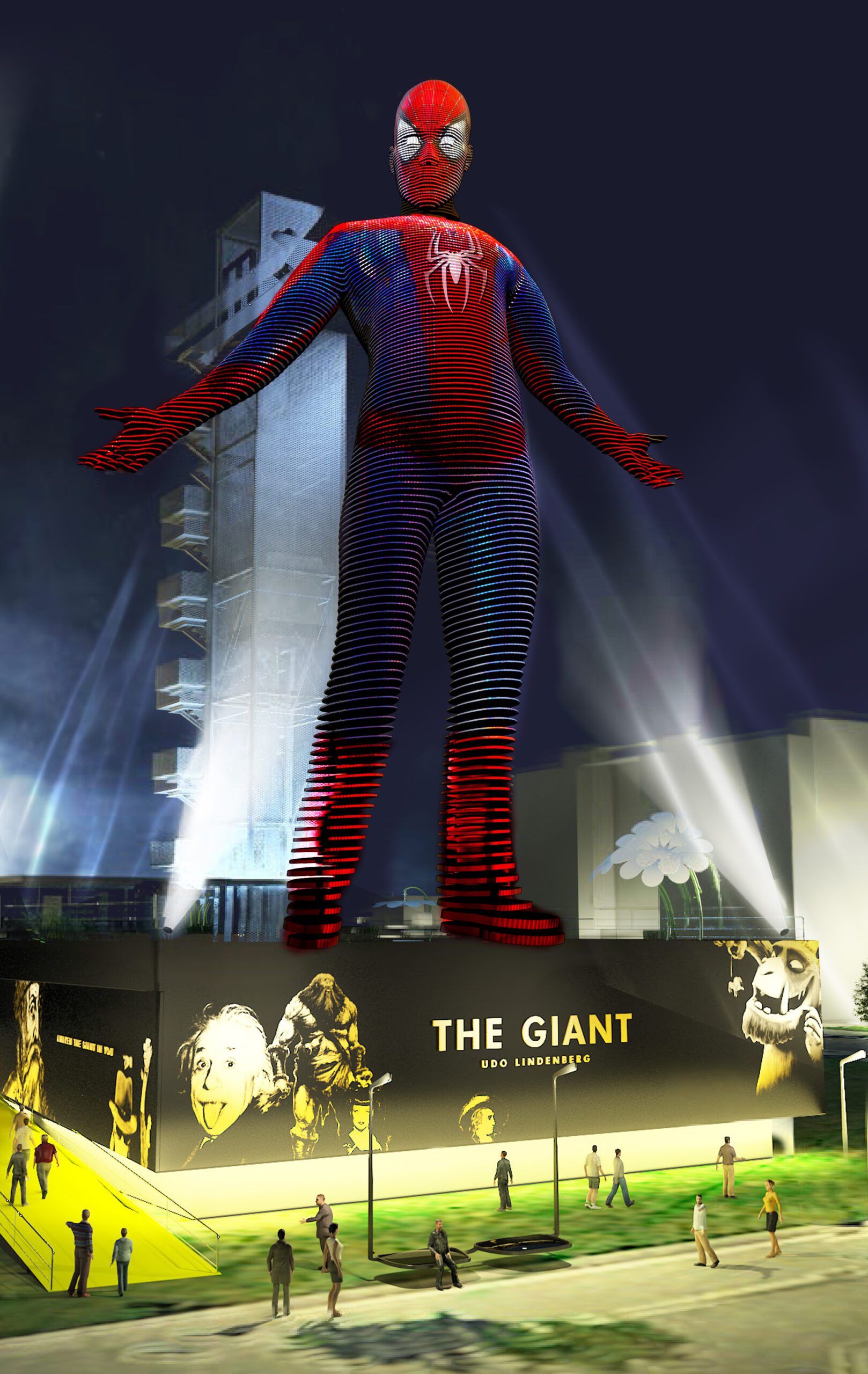 Introducing The Giant – The Tallest Moving Sculpture in the World

Tuesday 23rd March 2021: One of the most exciting international business and culture projects of the decade has just been launched. Called The Giant, it features the world’s tallest moving statue standing over 10 stories high. The Giant was conceived by The Giant Company based in Dublin, Ireland; the idea was initially inspired by Jonathan Swift’s Gullilver’s Travels.

Supported by Enterprise Ireland, the Giant company has engaged CBRE the largest commercial real estate company globally for the concept of The Giant which includes the multi-storey statue mounted on a plinth housing a novel exhibition. The Giant’s arms and head can move to a diversity of positions and its patented skin, a matrix of millions of programmable LED pixels gives it the ability to instantly take the form of any man or woman, boy or girl from historical figures such as Albert Einstein or Amelia Earhart to stars of today from Lionel Messi to Beyoncé. Every hour The Giant will transform itself into an exemplary man or woman and will also have the ability to speak or sing to the crowds that gather below.

Between these dramatic appearances visitors who have been scanned inside the exhibition space will be uploaded onto the giant statue resulting in the world’s most spectacular selfie. Visitors who are scanned can add audio messages to their Giant Selfies wishing friends and relatives birthday and anniversary greetings, offering marriage proposals and other salutations.

More than a visual wonder, visitors to the attraction will explore several fully immersive exhibits that feature state-of-the-art technologies including augmented and virtual reality, robotics and artificial intelligence. The exhibits are designed to be surprising, entertaining, educational and engaging for all age groups. Another feature of The Giant is the viewing tower where visitors can literally stand on the “shoulders of a giant” and look out over the city from a dramatic vantage point.

The attraction offers significant economic benefits to cities where it will be located providing a diversity of jobs and attracting local and international tourists and residents who will increase footfall in the vicinity. Besides income from ticket sales, The Giant provides several revenue-producing opportunities including advertising on the spectacular three-dimensional digital statue; Giant selfies; private and corporate events and conferences and retail shops and restaurants which are situated on the terrace roof garden. The Giant is expected to draw approximately 500,000 visitors each year, generating annual revenues of around €12m. Each Giant will cost between €15–€20m to develop, depending on location and size of Giant, which is variable.

The Giant Company led by award-winning entrepreneur Paddy Dunning (the man behind Dublin’s National Wax Museum, Temple Bar Music Centre/The Button Factory and a leader in the redevelopment of Temple Bar, Dublin’s Cultural Quarter) is now seeking sites and partners and expressions of interest from international developers who want to attract hundreds of thousands of people to a particular location (including places where footfall has been reduced by the current pandemic). Paddy and his team are working with award-winning Berlin-based architecture studio Dan Pearlman on the creation of The Giant and it’s ground-breaking exhibition. They have also had support from global advisory, engineering, planning and design firm Arup during the early stages of design development.

Dunning explains, “We are now seeking 21 sites in 21 cities by the end of 2021. The Giant will be one of the world’s most ambitious cultural and commercial projects bringing together art, amusement and wonder to create a contemporary and highly profitable business. We envision The Giant as an adjunct to new urban redevelopment projects, stadiums, arenas, shopping centers, museums and other locations; it’s going to be an awe-inspiring addition to the cities where we locate it as you will see in our video on our website and youtube. Check it out!”

International commercial property giant CBRE is one of the real estate firms partnering with The Giant Company in order to find premium sites in cities around the world.

Speaking about securing interest, Florence Stanley of CBRE said: “We’re looking for prime locations and we are also open to more off-beat sites that need to drive footfall. We are very excited to be working on this project

sourcing sites in 21 cities around the world. Our immediate priority is securing appropriate locations and from there finding investors who will see the huge benefits of situating this iconic attraction in their city. Franchising the Giant is also an option.”

Start up project we have supported from when it was at concept stage. At the core of this innovation is an

ambitious team that has a vision for developing landmark attractions in multiple city locations across the globe. We look forward to supporting the next phase of the roll out of this innovation.”

Jim Pattison Jr., President of Ripley’s Entertainment Inc. owners of Ripley’s Believe it or Not! and Guinness

World Records attractions said: “The Giant has real potential on so many levels: iconic landmark, attractions,

technology, lighting, education and most importantly family fun! The outside will be an artistic canvas that can celebrate any event in the community and inviting every guest to be one of the many beautiful faces of the

Giant. Excited to see which world-class city will be the first to take advantage of this Gigantic opportunity!”

The Giant will also present new dimensions in gastronomy and shopping. The team will work with leading chefs, artists and inventors in each location to ensure that the dining and retail experience is imaginative and of the highest level for its customers. The Giant will lead the charge on promoting sustainable living and climate action, funding programmes and as well as engaging in other philanthropic endeavours. While every Giant is bespoke for its city and country, each is also a member of a family that can digitally communicate with other Giants around the world. Global events will engender global communities and these trendsetting events will become a defining social feature of the coming decades. Interested parties and potential investors can learn more and find a RFP (Request For Proposal) here https://thegiantcompany.ie/ or email enquiries@thegiantcompany.ie.

In this article:Featured, statue, the giant