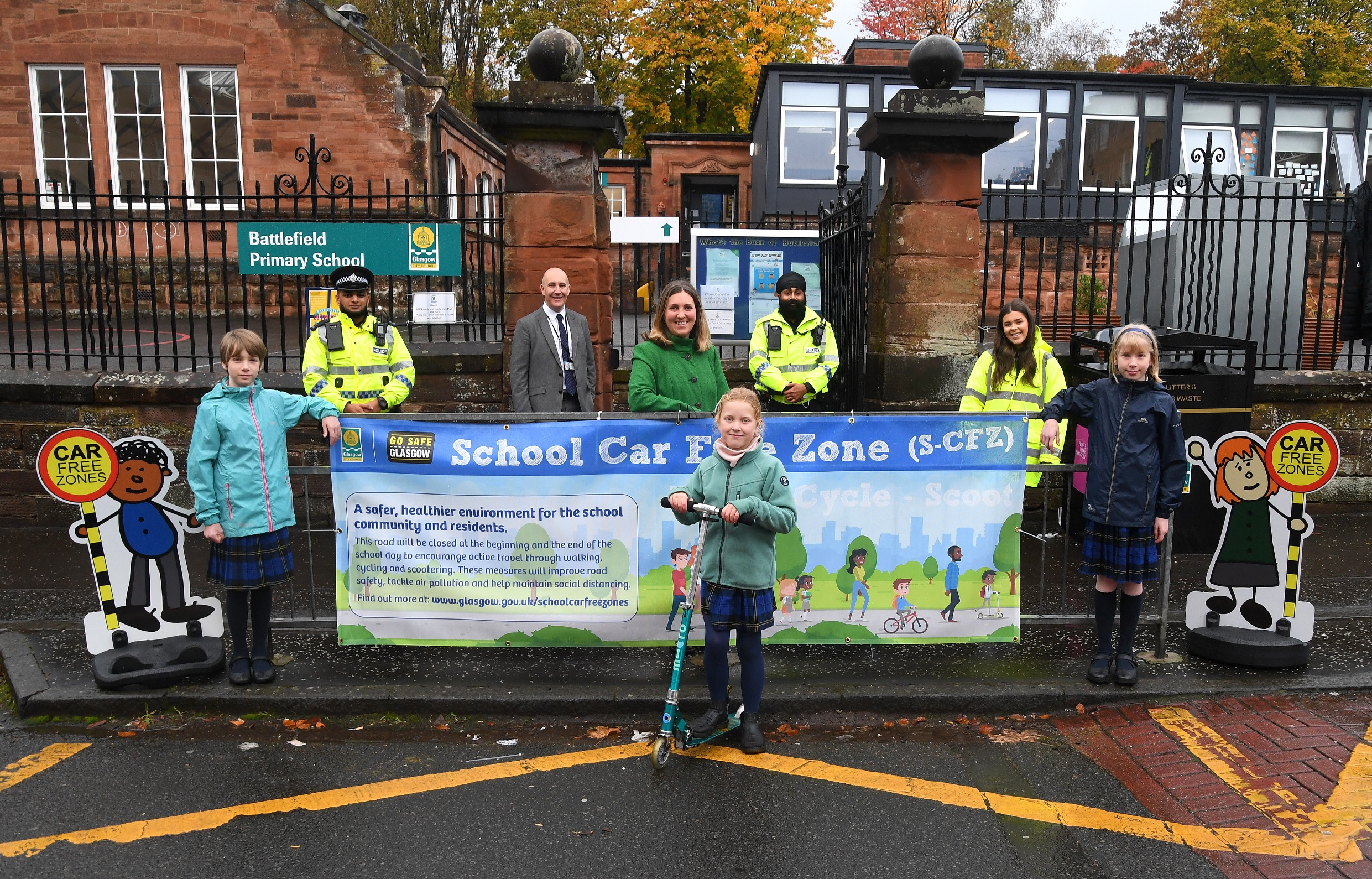 Safer streets for children popped up across Glasgow today as the second wave of the city’s school car free zone scheme came into force.

The car free zones will prohibit driving outside 20 primary schools at drop-off and pick-up times each school day as part of the Spaces for People scheme that provides extra space for physical distancing for walkers, wheelers and cyclists.

The introduction of the zones follows an on-going trial of car free zones has seen significant reductions in traffic around six primary schools with 69% fewer vehicles identified outside those schools at the start and end of the day. Research from Napier University also shows the school car free zones have a positive impact on the perception of road safety and encourage active travel in the wider community.

This phase of the roll-out of the school car free zones was already in the pipeline but was brought forward with backing from the Spaces for People programme as part of the effort to suppress the spread of Covid-19. The new zones have been introduced on a temporary basis.

Schools identified as locations for a car free zone either requested involvement in the scheme or were nominated by parents or local elected members. A full list of the schools involved can be found below.

Councillor Anna Richardson, City Convener for Sustainability and Carbon Reduction, says with schools returning after the October break, there was no better time for second phase of the school car free zone scheme.

Councillor Richardson said: “The Covid crisis is still with us and the concern about the need physical distancing remains at the forefront of people’s minds. Extra space outside schools will help staff and pupils get to school safely rather than deal with the often chaotic scenes witnessed at drop-off and pick-up times.”

“There has been a very positive response to the car free zone trial with a big drop in traffic around the six schools at the times for the school run. Significantly fewer cars at the school gate for when the bell goes makes it much safer for children to get to and from school.

“With risk on the roads around those schools there are greater opportunities for children to come and go safely from school on foot or by bike, which can only be good for health and well-being.”

Councillor Cunningham said: “All the evidence we have points towards car free zones making the school gate a safer place for children to be. It’s always been our intention to expand the use of school car free zones as much as possible and we are responding to where interest has been expressed.

“Parents routinely talk to us about road safety and want to know their children will be safe as they come and go from school. The school car free zones are providing the kind of reassurance parents are looking for on road safety and they can also support physical distancing during this unprecedented time.”

The zones are designed to prohibit cars and other vehicles from driving up to school gates between 8.30am and 9.15am and then 2.30pm and 3.15pm each week day during term time.

Blue badge drivers are exempt and residents within the zones will be issued with permits that allow them to park without penalty. But any other driver who enters the zone during the specified times can be fined £50 by police.

For any car free zone to become permanent a full traffic regulation order will be required.

In this article:Featured, glasgow schools